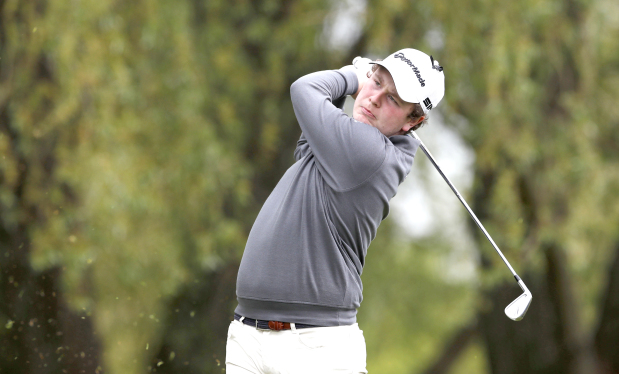 LONDON: Scotland’s Robert MacIntyre carded a six-under-par 66 to take a share of the halfway lead at the British Masters yesterday.

World number 45 MacIntyre, the highest-ranked player in the tournament, opened with five birdies in a row in testing conditions at The Belfry before his run ended with a bogey at the sixth after sending his drive into the water.

After dropping a stroke on the 12th hole, MacIntyre responded with three birdies on the back nine to join compatriot Calum Hill and veteran Richard Bland on seven under at the top of the leaderboard.

England’s Bland carded a 69 to stay bogey free for the week, while Hill bogeyed the final hole in a 70.

Having finished tied-12th at the Masters last month, MacIntyre had all eyes on him on his return to the British soil.

“I was in free flow,” MacIntyre said of his blistering start. “I hit a couple close but the putter was working. For me it felt beautiful.

“That could have been a crazy score. I still missed quite a few chances but that’s golf.”

When asked if he had felt the pressure of being the top-ranked player in the field, the 24-year-old added: “Not at all.”

South Africa’s Justin Harding and Frenchman Julien Guerrier were alongside 2018 champion Eddie Pepperell on six under, while tournament host Danny Willett dropped three strokes on his final four holes to slip four off the pace.