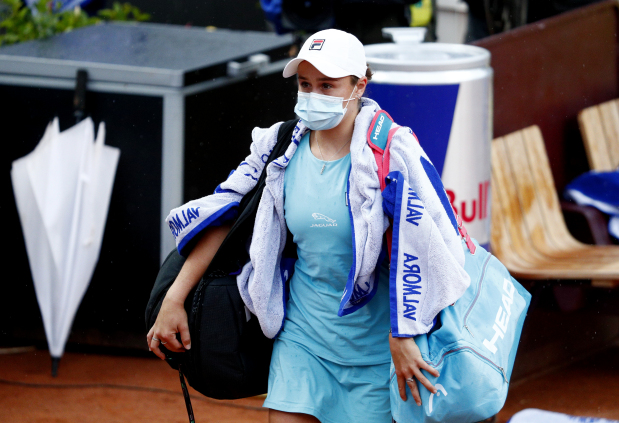 ROME: World number one Ash Barty was forced to retire from her Italian Open quarter-final against Coco Gauff with an arm injury, raising doubts on her participation at the French Open.

Barty, the 2019 French Open winner, was leading 6-4 2-1 against her American opponent when she called a physio and had her right-arm strapped with a compression sleeve.

The Australian eventually decided against continuing the match in wet conditions in Rome, allowing Gauff to book a place in the final four.

After the match, Barty revealed she was struggling to serve “anywhere near 100 per cent” as heavy conditions aggravated her muscular problem during the match.

“I hate the most is not being able to finish a tennis match,” she said.

“But the pain was becoming too severe, so it was important that I listen to my body and of course try and do the right thing, knowing that we have a Grand Slam in two weeks’ time.”

Barty said it is a pre-existing arm issue which her team has been managing throughout her career.

“It just pops up every now and again,” she added. “I think the conditions today certainly didn’t help that, but we’re confident we know how to manage it. So we just move on and know that the right decision was made today.”

Barty missed the 2020 claycourt swing due to the Covid-19 pandemic but has returned even stronger this season, winning the title in Stuttgart before finishing runner-up to Aryna Sabalenka in Madrid last week.