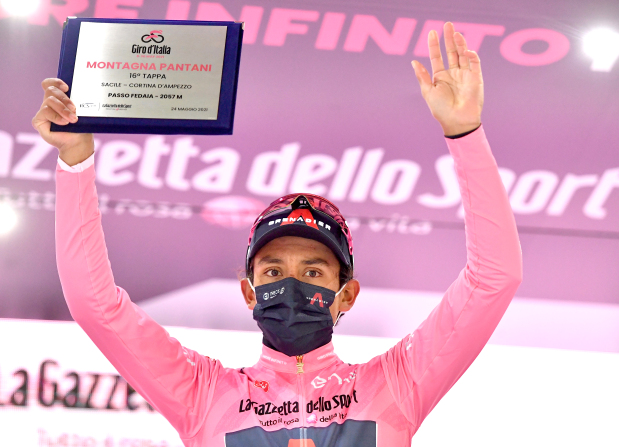 ROME: Colombian Egan Bernal won stage 16 of the Giro d’Italia yesterday to strengthen his grip on the overall leader’s Maglia Rosa, as bad weather conditions forced the race from Sacile to Cortina d’Ampezzo to be shortened from 212km to 155km.

Cold, wet and snowy conditions led to the decision to shorten the stage as two high-altitude climbs at the Fedaia and Pordoi passes were cut from the race.

But the Ineos Grenadiers rider battled against the elements to finish 27 seconds ahead of Frenchman Romain Bardet and Damiano Caruso of Bahrain Victorious.

Bernal now has a lead of two minutes and 24 seconds over second-placed Caruso in the general classification rankings.

British Maglia Rosa hopeful Simon Yates lost two minutes and 36 seconds on Bernal in the Dolomites, finishing 11th in the stage to fall from second to fifth overall, four minutes and 20 seconds behind the Colombian.

Bernal now has a lead of two minutes and 24 seconds over second-placed Caruso in the general classification rankings.

The poor weather also impacted the television coverage, as the aircraft that transmits the signal was unable to take off and camera helicopters could not fly.

Bernal’s descent from the 2,236-metre summit of the Passo Giau – the highest point in the Giro – to the finish line therefore went unseen by those watching from afar.

The 24-year-old surged past Antonio Pedrero to take the lead with 21 kilometres to go and by the time he appeared in Cortina d’Ampezzo he was all alone.