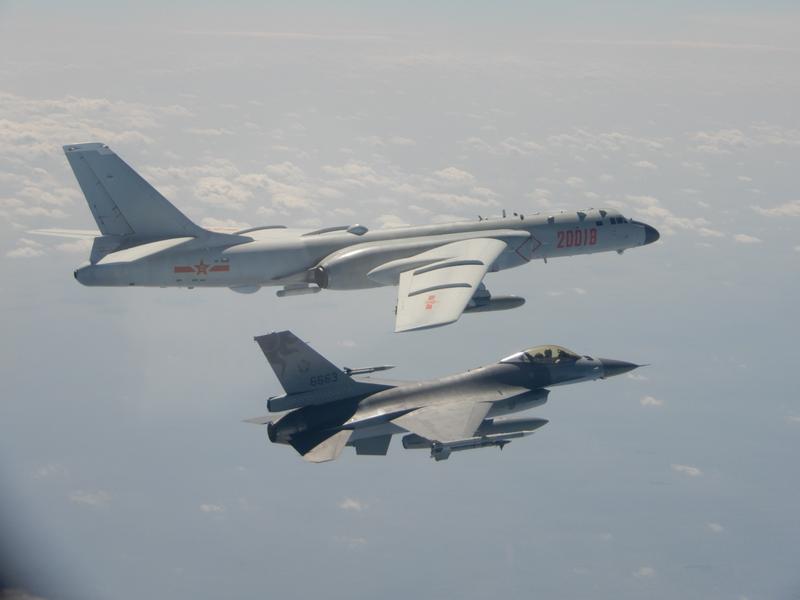 File Image - An H-6 bomber of Chinese PLA Air Force flies near a Taiwan F-16 in this February 10, 2020 handout photo provided by Taiwan Ministry of National Defense. In a statement, the ministry said Chinese J-11 fighters and H-6 bombers flew into the Bashi Channel to the south of Taiwan, then out into the Pacific before heading back to base via the Miyako Strait. (Reuters Photo)

The air force said they were forced to scramble jets on Monday to conduct visual confirmation after the planes flew to within 60 nautical miles off the coast of Sarawak state of Malaysian Borneo.

The Chinese planes did not contact the regional air traffic controller despite being instructed several times, the air force said.

"This incident is a serious threat to national sovereignty and flight safety due to the air traffic density over the airways," the air force said in a statement.

China's embassy in Kuala Lumpur did not immediately respond to a request for comment.

China has been pushing an expansive claim over the waterway, through which about $3 trillion worth of ship-born trade passes annually.

Brunei, Malaysia, the Philippines, Taiwan and Vietnam also have competing claims to various islands and features in the area and China's coastguard routinely warns foreign boats and aircraft to leave what it calls its territory.

Malaysia's air force said the planes, comprising Ilyushin il-76 and Xian Y-20 strategic transporters, had traveled in an "in-trail" tactical formation at altitudes of between 23,000 and 27,000 feet.

The incident follows months of diplomatic protests by the Philippines over the presence of hundreds of Chinese fishing boats in its Exclusive Economic Zone, which it says are manned by militia. China has largely ignored the complaints.