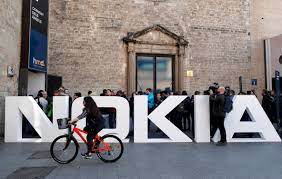 A cyclist rides past a Nokia logo during the Mobile World Congress in Barcelona, Spain February 25, 2018. REUTERS/Yves Herman

BRUSSELS: Daimler has agreed to pay Nokia for using its patents, ending a row that highlighted a battle between tech and car companies over royalties for key technologies.

Nokia, which makes 1.4 billion euros ($1.7bn) in licensing revenues every year, and carmaker Daimler had sued each other in German courts in recent years, with mixed results.

Tech firms want automakers to pay royalties for technologies used in navigation systems, vehicle communications and self-driving cars, but the latter say their suppliers should pay instead, which could reduce the fees for patent holders.

The agreement announced jointly yesterday marks the latest win for Nokia which in April struck a deal with China’s Lenovo under which the world’s biggest PC maker would make a net balancing payment to the Finnish telecoms equipment maker and resolve all pending litigation.

That followed a deal with Samsung the previous month in which the South Korean company agreed to make royalty payments for its technologies related to video standards.

Nokia and Daimler did not disclose the terms of their patent licensing deal, but said they would halt litigation. The German carmaker has to date never paid Nokia for using its patents.

According to sources familiar with the settlement, Nokia receives fees of a little over $2 per vehicle under patent licensing deals for similar technologies.