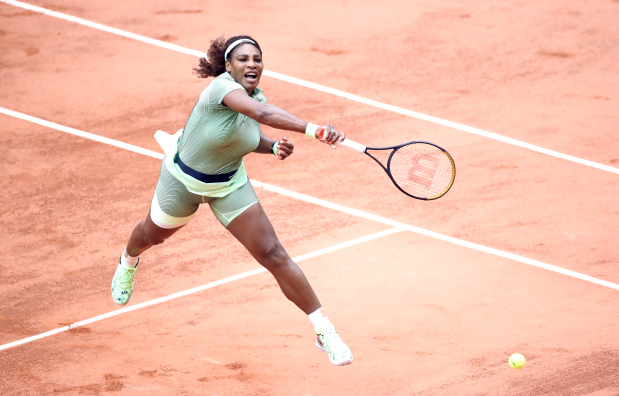 PARIS: German sixth seed Alexander Zverev blew hot and cold with his serve but had enough artillery to take down Russian qualifier Roman Safiullin 7-6(4) 6-3 7-6(1) to reach the third round of the French Open yesterday.

Three-time Roland Garros champion Williams, who has been stuck on 23 major titles since 2017, one behind Margaret Court’s all-time record, went through the gears in the opening set before letting her guard down.

The 39-year-old, who is seeded seventh in Paris but has not been past the fourth round here since reaching the final in 2016, fell 4-2 behind in the second set as Buzarnescu broke for the first time.

But the American was back to her dominant self as she stole her opponent’s serve in the next game and set up two break points in the 11th game.

Buzarnescu kept her composure to stave them off and level for 5-5 before sealing the second set on Williams’s serve.

Williams was 4-0 up after breaking twice in the decider but the scoreline did not reflect the fight the Romanian put up to stay in the contest.

Williams’s experience, however, prevailed in the key moments as she set up a meeting with fellow American Danielle Collins.

She has fallen in four Grand Slam finals and earlier this year lost in the semi-finals at the Australian Open.

Following that she underwent oral surgery and played only three Tour-level matches heading into the French Open, winning one.

The Belarusian 15th seed, a former semi-finalist at Roland Garros, started strong when she broke Tauson in the opening game of the match but the Danish 18-year-old broke back to make it 2-2 in the first set.

However, Azarenka broke again to take a 6-5 lead before serving out the opening set. The pair then traded breaks twice in the second set, with both players making a number of unforced errors.

But the vastly experienced Azarenka, 31, had the crucial break of serve again at 4-4 to take the lead. She then held serve to clinch victory and book a third round match with American 23rd seed Madison Keys.

Third-seed Aryna Sabalenka littered Court Suzanne Lenglen with dozens of unforced errors but still beat Aliaksandra Sasnovich in their Belarusian battle 7-5 6-3 to move into the third round.

Sabalenka, who won her first claycourt title in Madrid last month and also reached the final in Stuttgart to arrive in Paris in superb form, made a total of 34 unforced errors before beating world number 50 Sasnovich.

Venus Williams and Coco Gauff, 23 years apart in age, fell at the first hurdle of the women’s doubles when they lost 7-6(5) 4-6 3-6 to 13th seeds Ellen Perez and Zheng Saisai.

Gauff has been in the spotlight ever since her astounding run to the fourth round as a 15-year-old at Wimbledon in 2019, when she knocked out Williams, her idol and a seven-time major winner, in her opening match.

She also beat fellow American Williams at last year’s Australian Open on her way to the fourth round in Melbourne.

Yesterday, Williams, 40, and Gauff, now 17, took the opening set in the tiebreaker amid big cheers from the crowd but went down in the next two in a match that lasted two hours and 11 minutes.