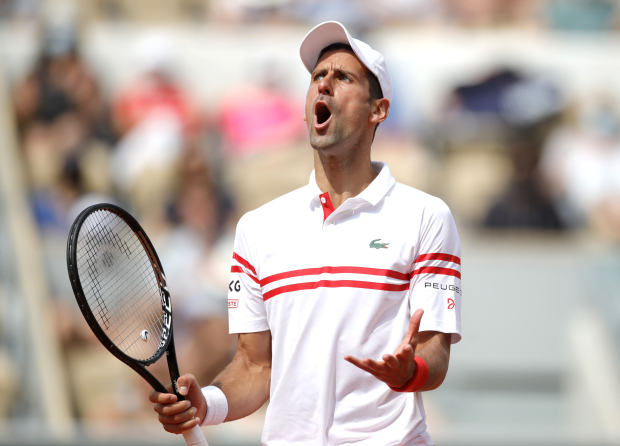 PARIS: World number one Novak Djokovic put on a clinical display to stroll past Uruguayan Pablo Cuevas 6-3 6-2 6-4 yesterday and reach the third round of the French Open.

The 2016 champion arrived in Paris having won the Belgrade Open at home last week and a run to the title round at the ATP Masters 1000 event in Rome, where he lost to Rafa Nadal, before that.

He has not lost a set yet this week and stayed solid to dismantle the challenge from claycourt specialist Cuevas, who has won all of his six Tour-level titles on clay.

Cuevas, ranked 92nd, showed flashes of resistance against the 34-year-old Serbian but the top seed raised his game when he needed to and produced some sublime winners off his backhand to keep alive his chase for a 19th Grand Slam title.

Meanwhile, Roger Federer lost his trademark cool but found some vintage tennis as he beat Marin Cilic 6-2 2-6 7-6(4) 6-2 to move into the third round.

The 39-year-old Swiss brushed Cilic aside in a one-sided first set but lost the second after a heated debate with the chair umpire over the time he was taking to towel down before Cilic served knocked him out of his stride.

Cilic looked dangerous when he battled back from a break down but Federer raised his game in the tiebreak to move ahead.

A Cilic double fault gifted eighth-seed Federer a break for 3-1 in the fourth set and there was no way back from there.

Federer closed out the match in clinical fashion to set up a third-round against Germany’s 59th-ranked Dominik Koepfer.

Women’s world number one Ash Barty retired from her second round match against Poland’s Magda Linette with an injury. The 2019 champion, who was trailing 6-1 2-2 against Linette, started the second-round match with taping on her left thigh, having said earlier that she suffered a flare-up through her left hip during the weekend.

Coco Gauff reached the third round of the French Open for the first time as the 17-year-old American battled past China’s Wang Qiang 6-3 7-6(1). Last year’s runner-up Sofia Kenin eased into the third round with a 7-5 6-3 victory over fellow American Hailey Baptiste.

The fourth seed, who has been struggling this season, notably losing all of her three matches on clay before Roland Garros, will next face another American, 28th seed Jessica Pegula.

World number six Elina Svitolina wasted little time in advancing to the third round with a 6-0 6-4 demolition of American Ann Li.