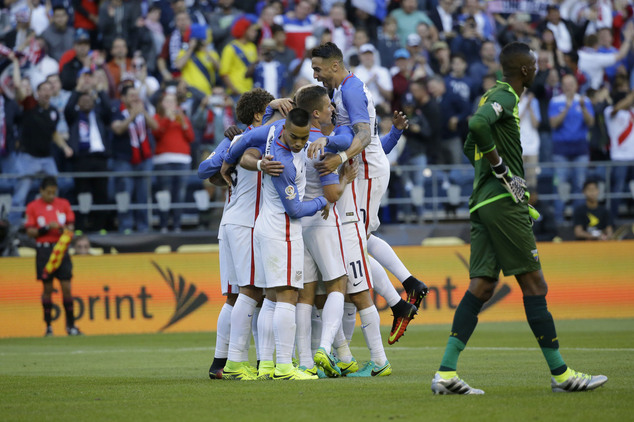 Seattle: Another benchmark for the United States. Another huge goal for Clint Dempsey.

As unlikely as it seemed a few weeks ago, the U.S. is in the semifinals of the Copa America.

Dempsey scored for the third straight game and set up Gyasi Zardes for a tap-in goal, boosting the United States into the Copa America semifinals with a wild 2-1 win over Ecuador on Thursday night.

Playing before a boisterous and almost completely partisan home crowd of 47,322 in the soccer-mad Pacific Northwest, the U.S. won a knockout game against a nation outside its region for only the second time and will play Argentina or Venezuela on Tuesday in Houston.

And the Americans did it on the back of Dempsey, their fiery 33-year-old striker whose place on the U.S. team was debated early this year. Dempsey's 52nd international goal, five behind Landon Donovan's American record, put the U.S. ahead in the 22nd minute. Zardes guided Dempsey's cross into the net in the 65th for his sixth goal and a 2-0 lead.

"I've been blessed that I was able to step up and, hopefully, I can keep going," Dempsey said. "I thought we played well. I thought we created some good chances in front of goal. We were unlucky not to score more."

Michael Arroyo scored for Ecuador in the 74th minute, making for a tense ending, and Enner Valencia missed a pair of great chances moments later on a pair of headers.

It was a chippy game that became costly for the U.S. American midfielder Jermaine Jones was shown a red card during a 52nd-minute confrontation that also saw Ecuador winger Antonio Valencia sent off after a second yellow card for a harsh tackle on Alejandro Bedoya along the sideline .

U.S. players immediately rushed in to the scrum after Valencia's tackle, and Jones raised an arm at Arroyo. Colombian referee Wilmar Roldan immediately showed a red card to Jones.

Klinsmann was irate at the red card, blaming the decision on fourth official Wilton Sampaio on the sideline.

"It was an absolute joke," Klinsmann said.

Jones will be suspended for the semifinal along with Bedoya and Bobby Wood, who both got their second yellow cards of the tournament.

Ecuador coach Gustavo Quinteros also appeared to be sent off late in the match.

The only previous knockout win for the U.S. over a non-CONCACAF team was against Spain in the 2009 Confederations Cup semifinal. The only other U.S. appearance in the Copa semifinals was in 1995, when it advanced to the final four by beating Mexico, then was eliminated by Brazil.

The Americans are now assured two more games in the tournament: the semifinal and either a third-place match or the final. The Argentina-Venezuela game is Saturday night, so the U.S. will have two extra days of rest.

After using the same lineup in the first three games — the first time the U.S. did that in three consecutive matches since 1930 — Klinsmann had to make a shift due to the red card picked up by right back DeAndre Yedlin against Paraguay that caused the speedy youngster to miss a chance to play back in his hometown. Klinsmann inserted Matt Besler at left back and flopped Fabian Johnson to fill Yedlin's spot on the right side.

Dempsey appeared energised playing in the home stadium of his Seattle Sounders, and his header provided the U.S. a chance to relax. Wood was tremendous all night, getting behind the defence and holding the ball up to provide chances on the attack.

On the first goal, Dempsey played the ball ahead to Wood, who dribbled and then passed to Jones. He crossed into the penalty area, where Dempsey had completed his run from midfield and beat Juan Paredes to the ball, directing it to the corner of the net past goalkeeper Alexander Dominguez from 8 yards.

The second goal was also a result of Wood playing the ball back. Brooks sent a long ball to Wood, and his pass to Besler was crossed to Zardes in the area. His headed pass found Dempsey, who was able to slide the ball across the mouth of the goal for Zardes to poke in.

"I had to bury it, just to make sure," Zardes said. "It's that striker mentality."

After that, the Americans tired in the wide-open play, and Ecuador turned up pressure. Arroyo's goal came off Walter Ayovi's free kick from a flank. Enner Valencia had two great chances in the 76th and 77th minutes, and Brooks nearly had an own goal in the first minute of stoppage time, only to see the ball deflected wide by goalkeeper Brad Guzan.

"At that point, every guy needed everything they had on the field, ready to do whatever it takes and just play with a collective willingness to suffer and just make sure we're walking off the field winners," said U.S. captain Michael Bradley, who wore a rainbow armband in honour of those killed in the Orlando, Florida, nightclub shooting last weekend. "That's certainly what pulled us through."