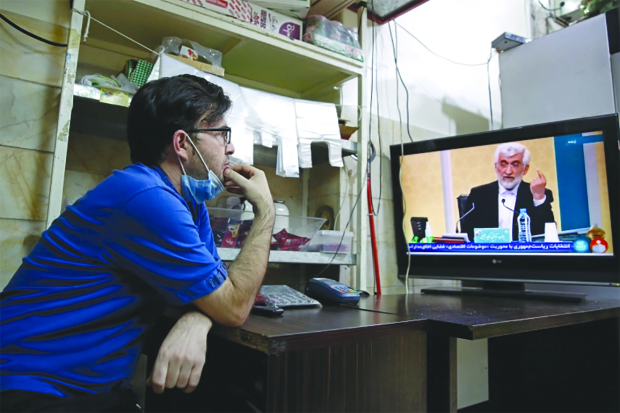 An Iranian vendor watches candidate Saeed Jalili speaking during the first televised debate between Iran presidential candidates, at a shop in Tehran

TEHRAN: The candidates in Iran’s 2021 presidential election have held a first presidential debate on live television, clashing over policy – and credentials – and offering roughly two divergent visions on h

The debate, the first of three and intended to focus on economy, was held yesterday at state TV headquarters in Tehran, where authorities had ensured that everything – from questions to seating arrangements – was neutral toward any given candidate.

But the preparations and the staging aside, it was a debate mainly between two political schools of thought, Reformism and Principlism, even though there are seven candidates. And almost all of the candidates were already charged-up, staging pre-emptive attacks on the perceived rival in anticipation of potentially powerful offensives.

That was exemplified most clearly in the inclination of most, though not all, of the candidates to speak as they saw fit rather than respond directly to the questions put forth to them by the moderator.

Principlist candidate Mohsen Rezaei, 67, became first to attack the President Hassan Rouhani administration – the subject of frequent criticism as the debate progressed – by calling his 2013 campaign symbol of a key “worthless.” And Nasser Hemmati, 64, delivered fiery opening remarks by saying that “a majority” of the Iranian society, including women, had no representation among the candidates, an explicit appraisal of the disqualification of some Reformist figures by Iran’s Constitutional Council from running in the election.

Alireza Zakani, a 56-year-old and relatively lower-profile Principlist, took Hemmati’s critiques the hardest. “Mr. Hemmati, you are not running against five people, you are running against 85 million people,” he said, in an attempted rebuttal of Hemmati’s complaint that the five Principlist candidates are ganging up against him. And the duo continued to clash until the end of the debate.

None of the candidates spared the Rouhani administration, even Hemmati, who was the governor of the Central Bank of Iran (CBI) under Rouhani until days ago and who took much heat for that perceived affiliation with the president. Mohsen Rezaei made sure that he identified Hemmati as “Mr Rouhani’s representative,” and Zakani, replying to an accusation that he was running merely to “back up” Ebrahim Raeisi, the 61-year-old highest-profile Principlist candidate and the chief of Iran’s judiciary, said it was actually Hemmati who was “covering the past eight years.”

But the former Rouhani administration official attempted to distance himself from the Iranian president, who faces a lot of criticism for the state of the economy. “I have been actually relieved of my duties (as CBI chief) because I held different view (on policy) than Rouhani,” Hemmati said. And he repeatedly dismissed Raeisi’s fellow-Principlists as mere “back-up” for the judiciary chief.

The most composed of all was Amir-Hossein Ghazizadeh, 50, who mostly stuck to the questions and avoided launching personal attacks. At one point, he even expressed exasperation at the others for continuing to attack one another instead of focusing on their own plans. And Sa’eed Jalili, 56, also kept composed for most of the debate.

An uneasy moment came when Rezaei threatened that he would “deliver Hemmati to court” if elected. And Hemmati threatened back by saying he would deliver Rezaei to Raeisi, the judiciary chief, if he wins.

Mohsen Mehr-Alizdeh, 65, kept the lowest profile for much of the debate, and he repeated a self-deprecating sound bite that his administration would be “a third Khatami administration,” referring to former President and leader of the Reformist faction Mohammad Khatami.

But it wasn’t all personal attacks. In the relatively limited time that was spent on laying out policy, and largely after a 15-minute intermission, the candidates toned down their rhetoric and offered more direct responses.