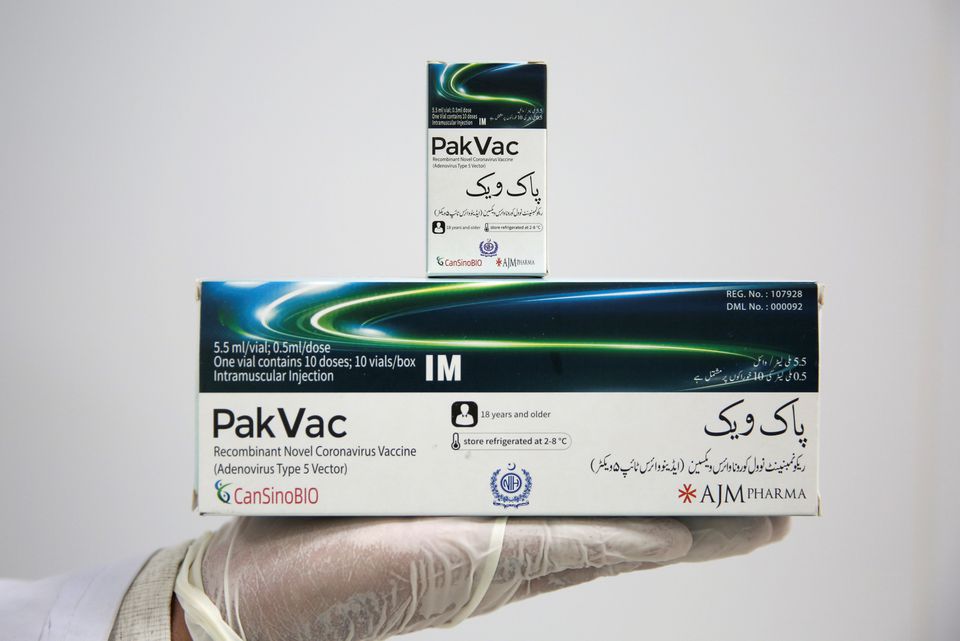 Branded PakVac, an initial batch of 118,000 doses of the vaccine is ready to be delivered to the government on Friday, the National Institute of Health (NIH) said two days after the inauguration of the production plant in Islamabad.

Pakistan signed a deal with CansinoBio late March to import a concentrate of the vaccine in bulk to process and package the vaccine locally.

"This is a co-production along with CanSino in Pakistan," professor Aamer Ikram, the NIH's executive director, told Reuters.

Ikram said the Chinese firm was supplying a vaccine concentrate which the plant then formulated, processed and packaged. CanSinBio had transferred some of its production technology to Pakistan and is supervising operations, he said.

Quality control was being carried out by Pakistan. "We've acquired technology and expertise to ensure quality control," he said.

The plant will start producing 3 million doses a month starting July, he said.

At the plant's inauguration on Tuesday, Health Minister Faisal Sultan described the local production a "milestone in the journey to achieve to self-reliance".

Both him and Ikram said the transfer of technology could help Pakistan to eventually manufacture the vaccine.

To be more cost-effective, 10 doses of PakVac will be filled into one vial.

According to the officials, PakVac will save around 25% on vaccine cost, which according to government figures amounts to $250 million so far.

Pakistan, which has a population of 220 million people, faced initial vaccination hesitancy and a shortage of vaccine supplies, but last week started mass vaccination for all adults.

It has so far relied heavily on its ally China in vaccine procurement and of the six vaccines approved for use in Pakistan, three - Sinopharm, SinoVac and CanSinoBio - are from China.

The government says it has procured over 18 million vaccine doses via purchases or donations from China and allocations from the World Health Organisation and the GAVI Vaccine Alliance.

The inoculation programme has administered 8.5 million doses of coronavirus vaccines so far, according to official figures. Pakistan reported more than 928,000 coronavirus infections and 21,105 deaths, with 1,893 cases and 83 fatalities on Friday.

"Our cooperation not only effectively contributes to Pakistan's efforts in fighting against the Covid-19 ... it reduces its dependence of the vaccine import," said Chinese ambassador to Pakistan Nong Rong said at the plant's inauguration.