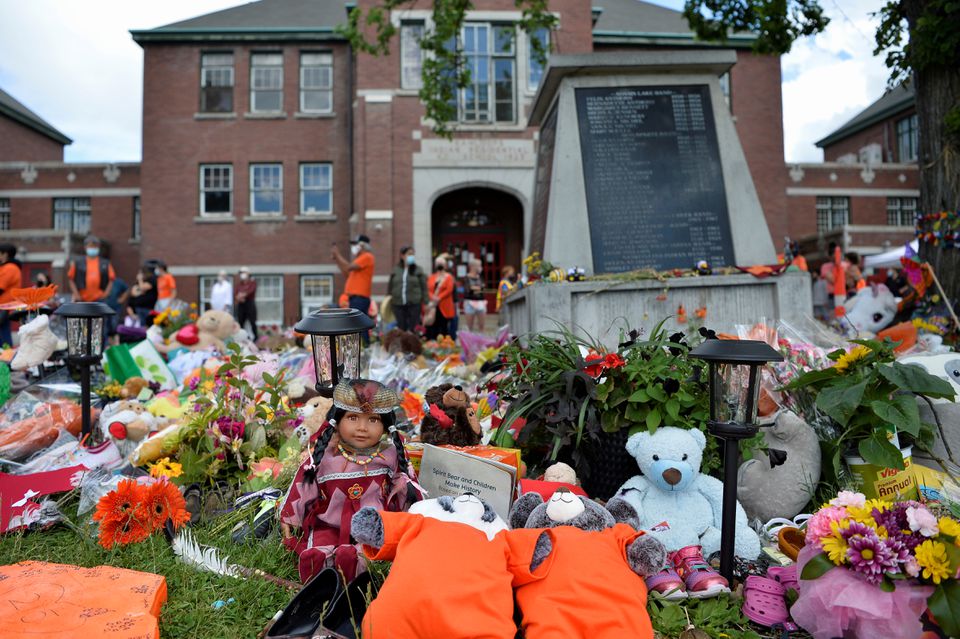 A memorial on the grounds of the former Kamloops Indian Residential School is seen after the remains of 215 children, some as young as three years old, were found at the site in Kamloops, British Columbia, Canada June 5, 2021. REUTERS/Jennifer Gauthier

Indigenous leaders and school survivors on Sunday dismissed Pope Francis’ expressions of pain at the discovery of 215 children’s remains at a former Catholic residential school in Canada, saying the church needed to do much more.

In his weekly blessing in St. Peter’s Square on Sunday, Francis said he was pained by the news about the former school for indigenous students and called for respect for the rights and cultures of native peoples. But he stopped short of the direct apology some Canadians had demanded.

"We're all pained and saddened. Who isn't? This is a worldwide travesty," Chief of the Federation of Sovereign Indigenous Nations in Saskatchewan, Bobby Cameron, told Reuters.

The discovery last month at the Kamloops Indian Residential School in British Columbia, which closed in 1978, reopened old wounds in Canada about the lack of information and accountability around the residential school system, which forcibly separated indigenous children from their families.

On Sunday, demonstrators tore down a statue of Egerton Ryerson, one of the architects of the residential school system, at the Toronto university named for him.

Kamloops survivor Saa Hiil Thut, 72, said people have not been held responsible for the suffering he endured during his years at the school.

"The culprits sort of get off scot-free," he said.

The system, which operated between 1831 and 1996, forcibly separated about 150,000 indigenous children from their homes, with many subjected to abuse, rape and malnutrition. Most were run by the Catholic Church on behalf of the government.

Canadian Prime Minister Justin Trudeau said on Friday the church must take responsibility for its role in the schools. A spokesman for Trudeau declined further comment on Sunday.

The Pope's statement "does not go far enough," said a spokesperson for Crown-Indigenous Affairs Minister Carolyn Bennett on Sunday.

“(The) government calls again upon the Pope and Church to apologise for their role.”