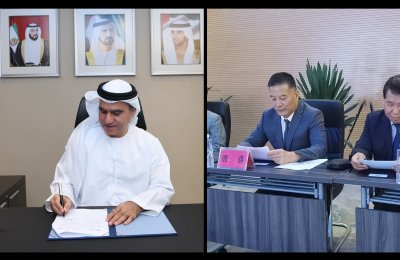 Dubai’s Roads and Transport Authority (RTA) has signed an agreement with Chinese group Zhong Tang Sky Railway, a leading company in the suspended railways, to explore the development of a futuristic suspended transport network.
The MoU comes as part of Dubai's endeavours to probe innovative solutions for developing a futuristic suspended transport network, said a statement from RTA.
The use of this type of transport in Dubai is aimed at accelerating the mobility of people, providing affordable mobility solutions besides encouraging the community members to use them and help curb traffic congestion, it stated.
RTA is seeking to consolidate the integration among mass transit means towards realising its vision to become a world leader in seamless and sustainable mobility, said Abdul Mohsen Ibrahim Younes, CEO of Rail Agency, after signing the MoU on behalf of RTA, with Tang Tong, Chairman of Zhong Tang Sky Train.
"The signing of this MoU is part of RTA’s ongoing efforts to increase public transportation trips to 26% by 2030," stated Younes at the signing ceremony which was attended by top officials including Jaber Al Bahandi, Chairman of Centurion Company (The UAE representative of Zhong Tang Sky Railway Group) and Tariq Al Bahandi, Head of Development at Centurion.
"Realising this objective requires developing advanced futuristic transport systems and improving the sustainable transport network in Dubai to encourage people and visitors to use public transport," he added.
According to Younes, RTA is aligning its efforts with the national agenda to nurture a sustainable environment in terms of air quality and reliance on clean energy.
"We are signing MoUs with a host of specialist companies in the development of suspended transport systems to identify the technologies used in this sort of mass transit means. We will be able to screen and obtain the best technologies and select the best systems for implementation in Dubai," he added.-TradeArabia News Service