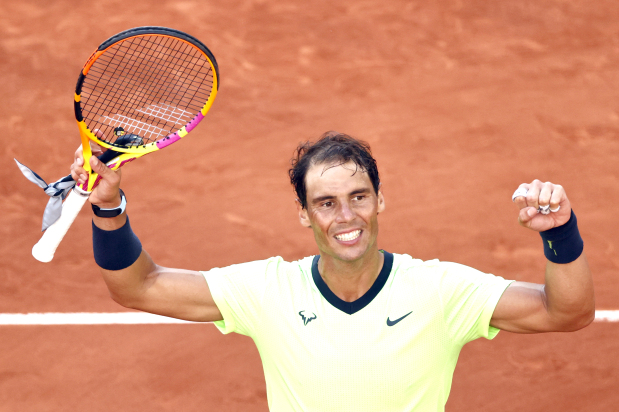 World number 19 Sinner, who at 19 years old has been labelled as the next big thing in tennis, hit a brick wall on court Philippe Chatrier after leading 5-3 in the opening set.

Third seed Nadal will face Diego Schwartzman for a place in the semi-finals after beating the Argentine in the last four in the previous edition of the tournament.

“I played against a very good player who has a great future and I’m very happy with the win,” Nadal said.

“I started playing well the first couple of games and then I played too defensive for a few games and gave him the chance to step into the court and play his shots. After that the match changed a lot.”

Facing the ultimate challenge on clay, Sinner struggled to get into the groove before cancelling out an early break as Nadal experienced problems with his first serve.

Sinner, who lost to the claycourt master in the quarter-finals here last year, found himself up a break after two Nadal double faults and a few uncharacteristic errors.

Serving for the set, however, Sinner lost the game to love and Nadal levelled at 5-5 on his opponent’s 25th unforced error before breaking to love again to seal the opening set.

After losing eight games in a row, Sinner stopped the rot with a break, clinching it after rushing to the net to retrieve a drop shot and delivering a stunning crosscourt passing shot.

Nadal quickly recovered to break again, however, and he served out to take a two-set lead before securing his 104th match win at Roland Garros.

The Spaniard has not lost at the Paris Grand Slam tournament since 2015 when he was knocked out in the last eight by Novak Djokovic, his potential semi-final opponent.

Meanwhile, world number one Novak Djokovic survived a huge scare as he fought back from two sets down against teenager Lorenzo Musetti to reach the quarter-finals after his Italian opponent retired with cramps in the fifth set.

Top seed Djokovic was outplayed by an inspired Musetti as he lost two tiebreaks, but the match then changed dramatically as the Serb fought back to 6-7(7) 6-7(2) 6-1 6-0 4-0 before progressing to the last eight in Paris for the 15th time.

He will play another Italian after Matteo Berrettini was handed a walkover after Roger Federer’s withdrawal.

Argentine counter-puncher Diego Schwartzman overcame a sluggish start to book a place in the quarter-finals with a 7-6(9) 6-4 7-5 win over Germany’s Jan-Lennard Struff.

Despite arriving in Paris on a four-match losing streak, Schwartzman feels right at home at the claycourt major and has yet to drop a set in the tournament.