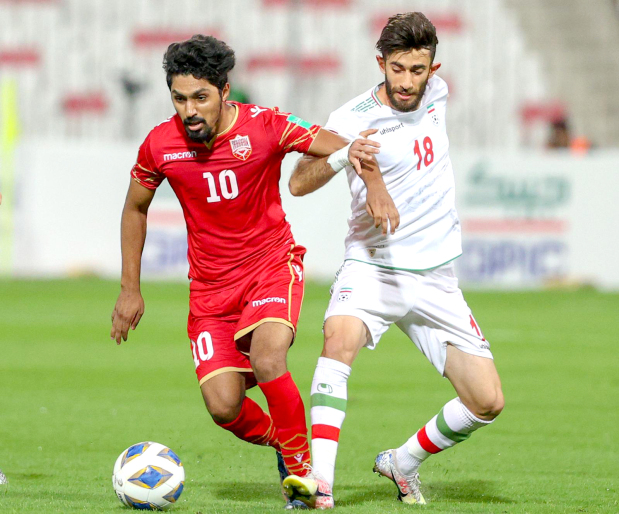 Sardar Azmoun struck twice and Mehdi Taremi added a third as Iran defeated hosts Bahrain 3-0 last night to reignite their challenge for a place in the third round of Asia’s qualifying tournament for the Fifa World Cup 2022 and AFC Asian Cup 2023.

The Iranians moved above Bahrain into second place in Group C, level on 12 points with their opponents despite having played one game fewer.

The opening minutes saw a tight contest with Bahrain, bolstered by the 8-0 win over Cambodia four days ago, forcing Iran goalkeeper Alireza Beiranvand into an early save following Mahdi Humaidan’s cross.

Iran adopted a more patient style of play when in possession but couldn’t find a way past Bahrain’s defence in the early part of the first half.

Iran had an opportunity to break the deadlock at the half-hour mark when Bahrain’s Ahmad Nabeel was cautioned for his rough tackle on Mehdi Taremi outside the box, but the FC Porto striker’s effort from the resulting free-kick struck the wall.

Iran began to gradually assert themselves as they tested goalkeeper Sayed Mohammed Abbas with their long-range attempts, while Bahrain found Beiranvand a stumbling block.

Iran were a different side after the break and their persistence was finally rewarded in the 54th minute when Azmoun slotted past Mohammed Abbas to break the deadlock, courtesy of Taremi’s perfectly timed through pass.

Bahrain surged forward in search of the equaliser but were punished through a counter attack in the 61st minute as Taremi displayed impeccable control to collect the ball, with his pass finding a racing Azmoun who slotted home.

Bahrain continued pressing but it was Iran who would score again, with Taremi getting his deserved goal when he converted Ahmad Nourollahi’s pass with a strike into the bottom left corner of the net in the 79th minute.

Iran play Cambodia on Friday while Bahrain will end their campaign against Hong Kong on June 15.

Iraq continue to lead the group after securing a comfortable 4-1 win over Cambodia, Mohanad Ali opening the scoring for Srecko Katanec’s side after 18 seconds.

The winners of the eight groups advance to the next phase, where they will be joined by the five best runners-up after Qatar sealed first place in Group E with a 1-0 win over Oman.

Qatar’s status as World Cup hosts means they are not eligible to play in the third phase, leaving Japan and Syria, who sealed top spot in Group A yesterday with a 3-0 win over Guam, as the only teams certain of a place in the next round.

China enhanced their hopes of taking the runners-up spot behind Syria in Group A with a 2-0 win over the Philippines that was secured by second-half goals from Wu Lei and Wu Xinghan.

Vietnam remain top of Group G after they crushed Indonesia 4-0 while the UAE moved into sole possession of second place with a 3-1 win over Thailand.

Caio and Fabio de Lima gave the UAE a two-goal lead at halftime before Thailand’s 18-year-old striker Suphanat Mueanta pulled one back, only for Mohammed Jumaa to put the result beyond doubt in stoppage-time.

Uzbekistan kept Group D leaders Saudi Arabia in sight with a 5-0 win over Singapore as Jaloliddin Masharipov struck twice for Vahid Abramov’s side, who are now two points off the summit.

Australia, meanwhile, moved to the verge of booking their spot in the next round with a 5-1 rout of Chinese Taipei, and they lead Group B by five points from Jordan, who beat Nepal 3-0.