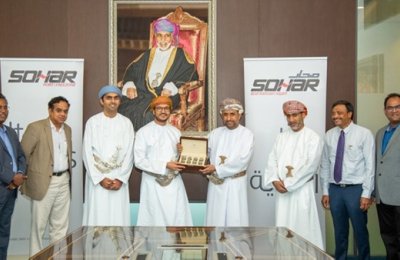 Omani business house Khimji Ramdas and top Indian marble and granite surfaces manufacturer Madhav Ashok Ventures Private Limited (MAVPL) have announced the successful commercial launch of their new engineered quartz stone products manufacturing plant at Sohar.
The Omani plant, set up through a Omani-Indian JV comprising Madhav Surfaces, a partnership of Khimji Ramdas subsidiary Al Khanjar Commercial Agencies, began its commercial production last week after a trial run of its plant and machinery, reported Oman Observer.
Madhav Surfaces and MAVPL had jointly invested around $10 million in the establishment of the high-tech plant at the Sohar free zone.
"With the start of this project, we will now be able to cater to demand for engineered stone in the US, European and Middle East Markets," the Indian company said.
The announcement comes nearly 18 months after Sohar Port and Freezone signed a land lease agreement with the JV partners covering a 20,000 sq m site for the establishment of the quartz stone manufacturing plant within the free zone.
The facility has been designed for the manufacturing of quartz slabs and other quartz products using chrome ore and calcined lime from the local market, to be exported to the USA and Europe, alongside the polishing of quartz slabs, the report added.