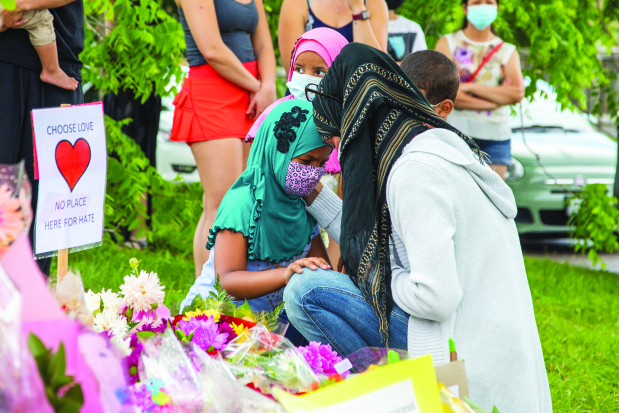 Mourners at a makeshift memorial at the fatal crime scene

OTTAWA: Canadian Prime Minister Justin Trudeau has promised to redouble efforts to fight far-right groups two days after a hate-motivated attack that killed four members of a Muslim family in the city of London, Ontario.

“This was a terrorist attack, motivated by hatred, in the heart of one of our communities,” Trudeau said yesterday in the House of Commons after observing a moment of silence.

The family, killed on Sunday when a pickup truck jumped the curb and ran them over, were targeted because of their religion, Canadian police said. The victims spanned three generations of a family and ranged in age from 15 to 74. A nine-year-old boy who survived remains in hospital with non-life-threatening injuries.

London, a city of about 400,000 people located halfway between Detroit and Toronto, has a large Muslim community and at least three mosques.

Rows of freshly cut flowers were placed on the grass at the entrance of the London Muslim Mosque, a place of worship at the heart of that community which the victims had attended.

“This is their home. And for the first time those that wear the scarf, who have beard, feel it’s not,” Khamissa said.

During the morning, a steady stream of adults and children left bouquets of flowers, stuffed animals and small signs expressing outrage at the street corner where the family was killed while taking a summer evening stroll.

“We’ll continue to fight hate online and offline ... (including) taking more action to dismantle far-right hate groups, like we did with the Proud Boys by adding them to Canada’s terror listing,” said Trudeau, due to attend a vigil outside the mosque later in the day.

Police arrested a man named Nathaniel Veltman, 20, in a parking lot about 500 metres from the mosque. He was wearing a body-armour type of vest. Veltman, who is white, was charged with four counts of first-degree murder and one count of attempted murder. Authorities are reviewing possible terrorism charges.