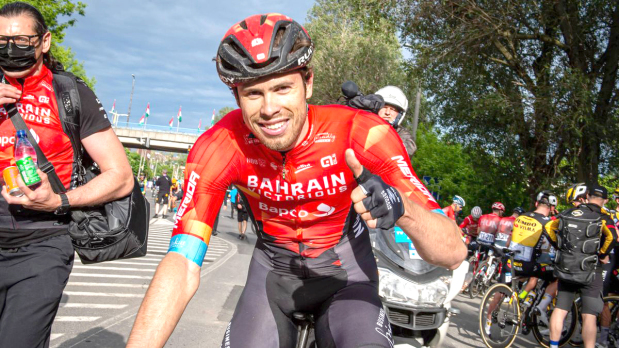 Phil Bauhaus of Bahrain Victorious won the opening stage of the 2021 Tour of Slovenia yesterday.
This is the German’s fourth victory in 2021, having already won a stage of the Tour de La Provence, and two stages of the Tour of Hungary.
Bauhaus finished four seconds ahead of Jon Aberasturi (Caja Rural-Seguros). Rui Oliveira (UAE-Team Emirates) was two seconds behind Aberasturi.
“The condition has been very good in recent weeks,” Bauhaus said. “In addition, the team has confidence in me as a sprinter. That I’m winning here now. I couldn’t be happier.”
His Majesty King Hamad’s representative for humanitarian work and youth affairs Shaikh Nasser bin Hamad Al Khalifa expressed happiness at Team Bahrain Victorious’ new win in one of the most prominent tours in Europe that always features wide participation and fierce competition. He underlined that the team is a source of pride and a leading factor in promoting Bahrain internationally.
He pointed out that the continued accomplishments by the team are due to the safe and sound plans being followed, stressing his keenness to continue supporting the team.
Shaikh Nasser congratulated Bauhaus, wishing him further success in the upcoming races.