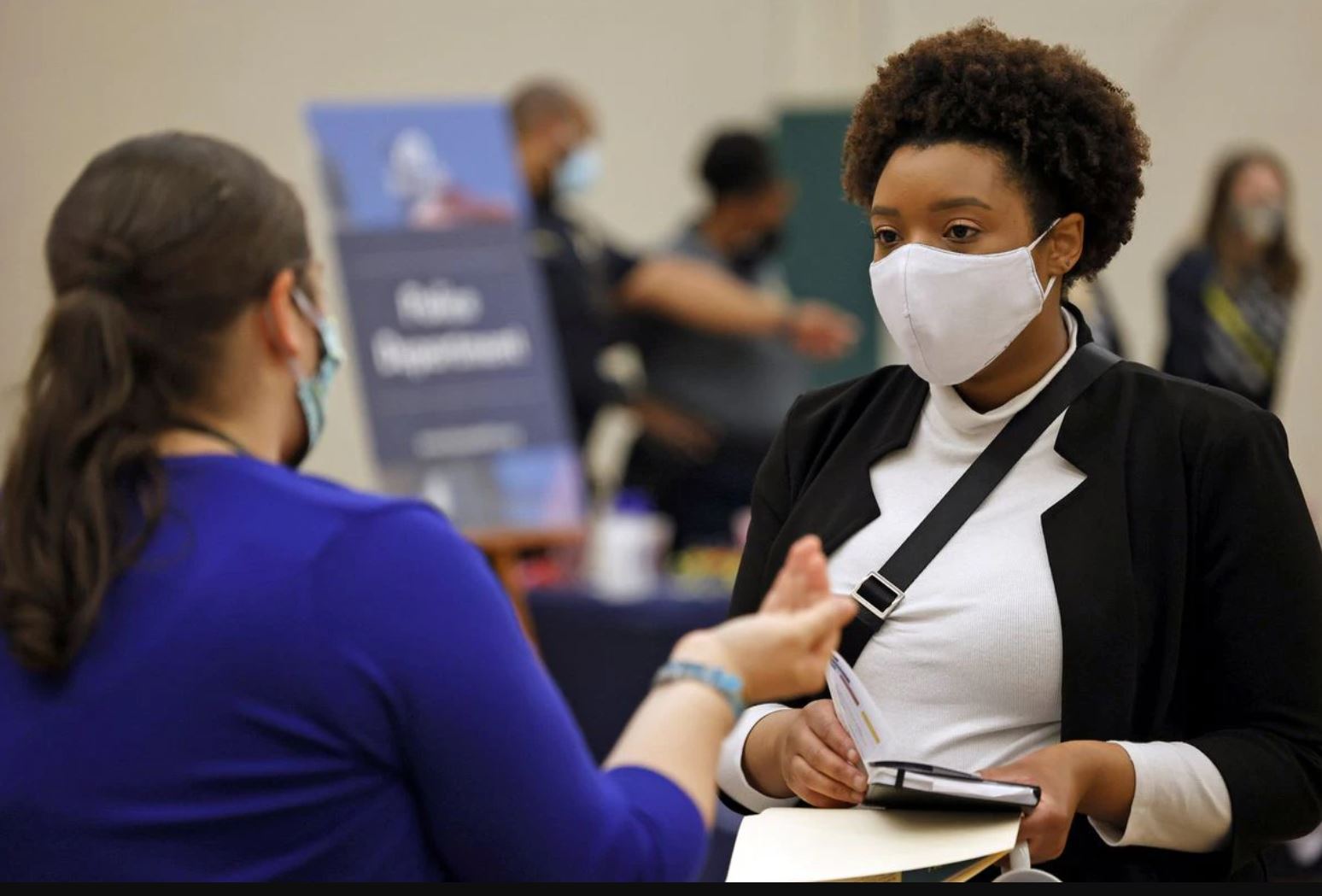 Britni Mann speaks with a potential employer during a job fair at Hembree Park in Roswell, Georgia, U.S. May 13, 2021. Reuters Photo

The number of Americans filing new claims for unemployment benefits likely fell last week to the lowest level in nearly 15 months, while consumer prices increased further in May as the pandemic's easing grip on the economy continues to boost demand.

The Labour Department is likely to report on Thursday that initial claims for state unemployment benefits totalled a seasonally adjusted 370,000 for the week ended June 5, compared to 385,000 in the prior week, according to a Reuters survey of economists.

That would be the lowest since mid-March 2020 when the first wave of COVID-19 infections barreled through the country, leading to closures of nonessential businesses, and mark the sixth straight weekly decline.

Layoffs are abating, with employers scrambling for labour as millions of unemployed Americans remain at home because of trouble securing child care, generous unemployment benefits and lingering fears of the virus even though vaccines are now widely accessible.

At least half of the adult U.S. population has been vaccinated against the virus, allowing for broader economic re-engagement. But the pent-up demand unleashed by the resumption of business operations is straining the supply chain and fanning inflation pressures.

Economists expect another report from the Labour Department on Thursday will likely to show the consumer price index increased 0.4% last month after surging 0.8% in April, which was the largest gain since June 2009.

In the 12 months through May, the CPI is forecast accelerating 4.7%. That would be the biggest year-on-year increase since September 2008 and follow a 4.2% rise in April. The anticipated jump will partly reflect the dropping of last spring's weak readings from the calculation. These so-called base effects are expected to level off in June.

Inflation could also get a boost from employers raising wages as they compete for scarce workers, despite employment being still 7.6 million jobs below its peak in February 2020. There are a record 9.3 million unfilled jobs.

Wages increased a solid 0.5% in May, with hefty gains in the leisure and hospitality sector.

Accelerating inflation will have no impact on monetary policy. Federal Reserve Chair Jerome Powell has repeatedly stated that higher inflation will be transitory. The U.S. central bank slashed its benchmark overnight interest rate to near zero last year and is pumping money into the economy through monthly bond purchases.

The Fed has signaled it could tolerate higher inflation for some time to offset years in which inflation was lodged below its 2% target, a flexible average. Its preferred inflation measure, the personal consumption expenditures (PCE) price index, excluding the volatile food and energy components, increased 3.1% in April, the biggest rise since July 1992.

"We have not yet seen the peak in inflation, but that should occur in the current quarter, though existing pressures should keep the year-over-year pace elevated for the remainder of 2021," said Sam Bullard, a senior economist at Wells Fargo in Charlotte, North Carolina.

"We expect inflation to slow more discernibly over the latter half of 2022, but with inflation expectations continuing to firm, core PCE inflation is expected to remain above 2.0% through our forecast horizon."

Though layoffs are abating, initial claims remain well above the 200,000 to 250,000 range that is viewed as consistent with healthy labour market conditions. Claims have, however, dropped from a record 6.149 million in early April 2020.

Further decreases in applications are likely as Republican governors in at least 25 states, including Florida and Texas, are cutting off unemployment programs funded by the federal government for residents starting on Saturday.

These states account for about 40% of the economy. The benefits being terminated early include a weekly $300 unemployment subsidy, which businesses say is discouraging the jobless from seeking work.