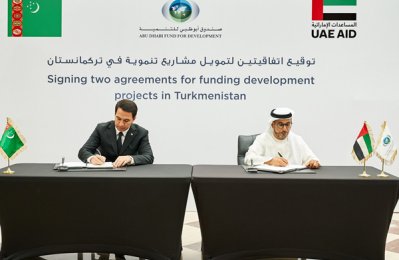 The agreement being signed
Abu Dhabi Fund for Development (ADFD) has signed two agreements worth AED367 million ($99.91 million) with the Government of Turkmenistan.
The first agreement includes the allocation of AED275 million towards the construction of an airport in Jebel in Balkan Region, whereas the second agreement aims to finance the development of a 10 megawatts hybrid power plant at a cost of AED92 million.
The two agreements were signed by Mohammed Saif Al Suwaidi, Director General of ADFD, and Jepbarov Rahimberdi Jepbarovich, Chairman of the State Bank for Foreign Economic Affairs of Turkmenistan. The signing ceremony also drew the participation of Suhail bin Mohammed Al Mazrouei, the UAE Minister of Energy and Infrastructure, Berdimuhamedov Serdar Gurbangulyevich, Deputy Chairman of the Cabinet of the Ministers of Turkmenistan, Garajayev Serdarmammet Saparmammedovich, Ambassador of Turkmenistan to the UAE, Khalifa Abdullah Al Qubaisi, Deputy Director General of ADFD, and several senior officials from both sides.
Commenting on the agreements, Al Suwaidi said: “The two agreements signed today articulate ADFD's commitment to advancing Turkmenistan’s infrastructure development and driving the country’s economic growth. We are confident that both projects will go a long way in ensuring an improved livelihood for the country’s population and fulfilling its sustainable development goals.”
Al Suwaidi added: "At ADFD, we prioritise building solid partnerships with the countries of the world through financing development and investment projects that contribute to sustainable growth. Since ADFD began its development engagement with Turkmenistan in 1999, both countries have made outstanding efforts towards expanding our relations and opening new avenues of investment and economic cooperation. This has led to the development of several joint development and investment projects.”
For his part, Jepbarovich lauded the UAE’s active role in financing projects and promoting investment cooperation with immense economic benefits for developing countries. This has been especially apparent through ADFD’s cooperation with the Government of Turkmenistan.
Jepbarovich added: "The two agreements we signed today with ADFD will further strengthen our bilateral relations, marking a key milestone in the development cooperation between both sides. Furthermore, it will enable Turkmenistan to accelerate economic growth through supporting key sectors such as infrastructure, energy and transportation.”
The airport development project in Jebel aims to improve the airport infrastructure in the Balkan region of Turkmenistan and enhance regional air connectivity in Central Asia. Additionally, it will help attract investments to the city of Jebel in particular, and Balkan region in general through improving the quality transportation services.
The project includes building Jebel airport terminal with capacity of 100 passengers per hour. The project components include planning, designing, construction and delivery of the project as well as training the airport staff.
The hybrid power station project aims to provide clean energy alternatives to meet the needs of people in Altyn Asyr. The project consists of development of hybrid power plant with 10 MW installed capacity.
In February 2021, ADFD signed three MoUs with the Government of Turkmenistan. The first MoU included the establishment of an investment company, whereas the second MoU included studying the possibility of building a chemical complex project in Turkmenistan to produce polyvinyl acetate. Under the third MoU, both sides agreed to study the possibility of financing several development projects focused on infrastructure development including renewable energy and air transport to enhance cooperation between the fund and the Government of Turkmenistan.
Over the years, ADFD has allocated a total of AED182 million towards the development of several projects in Turkmenistan. Notable projects include the establishment of a kidney disease treatment center in Ashgabat to advance the country’s healthcare sector.  These projects have bolstered Turkmenistan's efforts to implement the economic and social reforms and improve the quality of healthcare services in the country. -- TradeArabia News Service