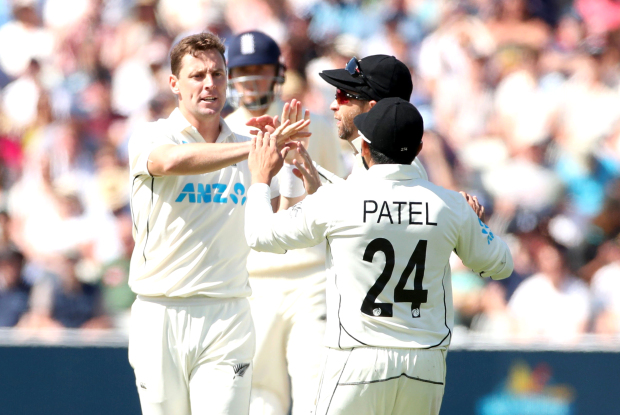 BIRMINGHAM: England lost nine wickets in their second innings on day three in a dramatic batting collapse to put New Zealand on the verge of victory in the second and final Test at Edgbaston yesterday.

England bowled New Zealand out for 388 to start the second innings 85 runs behind but the visiting team’s bowlers, led by seamer Matt Henry, reduced the home side to 122-9 at stumps with a slender lead of 37 runs.

Henry dismissed openers Rory Burns (0) and Dom Sibley (8) early in his opening spell, with both batsmen edging the new ball to the slips.

Zak Crawley, who came in at number three, failed with the bat yet again when he was dismissed for 17, trapped leg before by Henry.

Neil Wagner then joined the party with his swing bowling, first dismissing Ollie Pope, trapped leg before for 23, while Dan Lawrence was caught behind for a duck by Tom Blundell to leave England reeling at 58-5.

Spinner Ajaz Patel then got in on the act as James Bracey (8) was bowled when he missed a pre-meditated sweep shot before skipper Joe Root (11) nicked a delivery to Blundell behind the stumps.

Mark Wood (29) provided some resistance, with a six over deep midwicket ensuring New Zealand had to bat again, but he was dismissed when he tried to pull a short ball from Wagner to give Blundell his third catch of the innings.

Olly Stone (15) and James Anderson (0) were at the crease at stumps and have a tough task of saving the match and the series when they resume the innings today.

The first Test at Lord’s was drawn.

England coach Chris Silverwood said he was disappointed with his team’s application while batting, saying his players could learn from how the visitors put a price on their wickets.