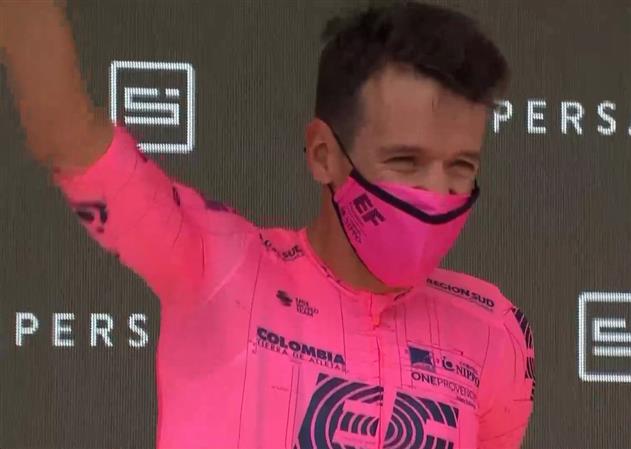 LONDON: Rigoberto Uran of EF Education-Nippo had a time trial to remember yesterday winning stage 7 of Tour de Suisse over the mountain pass of Oberalp Pass and giving his overall chances a boost.

The 34-year-old won the individual time trial by 40 seconds from Julian Alaphilippe (Deceuninck-QuickStep) in second while Gino Mader of Team Bahrain Victorious placed third on the stage.

It was the Colombian’s first win in almost three years as he prepares for the Tour De France later this month.

Yellow jersey wearer Carapaz started the day 1:11 ahead of Uran in the general classification but saw his margin cut to 17 seconds ahead of the final stage with Alaphilippe just 39 seconds back in third overall.

The 23.2-kilometre time trial consisted of a 10-kilometre climb to the summit of Oberalp Pass before a fast and technical 11-kilometre descent into the finish at Andermatt.

The up and down nature of the time trial also gave riders a selection problem of whether to choose a road or specialised time trial bike for the long valley road to the foot of the mountain’s hairpins.

Uran opted for a time trial position and led throughout moving up to second overall and putting pressure on race leader Richard Carapaz (Ineos Grenadiers).

“I’m surprised,” said Uran. “For me this is so special because I haven’t raced much after a small problem and I look forward to the Tour De France.

“I have good legs in this year’s Tour de Suisse, yesterday on the climb I had less but today I try. For me it’s a surprise because my legs today were incredible.”

Today’s eighth and final stage includes three mountain passes with the final Gotthard Pass coming at 144.4km which is 15km from the finish including a descent and flat run into Andermatt.