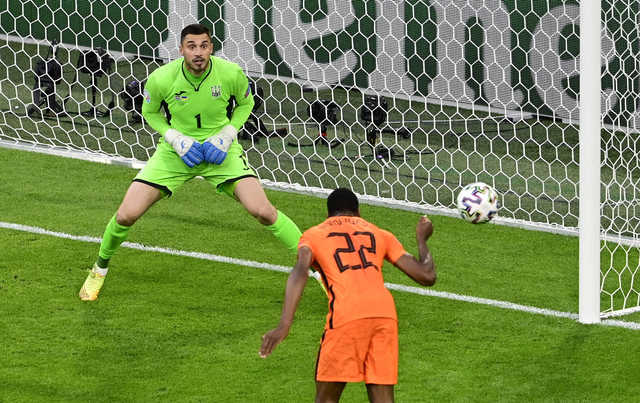 AMSTERDAM - Netherlands coach Frank de Boer’s unwavering belief in his 3-5-2 formation would have been tested had his side not grabbed a late winner in their seesaw 3-2 European Championship Group C victory over Ukraine at the Johan Cruyff Arena on Sunday.

The Dutch looked to be cruising with a 2-0 lead after goals from Georginio Wijnaldum and Wout Weghorst, but De Boer’s insistence on maintaining his 'risk and reward' approach almost cost them three points.

First Andriy Yarmolenko was given too much time and space to measure a trademark shot into the top corner of the Netherlands goal, before a poor free kick given away by the scrambling home defence culminated with Roman Yaremchuk heading in an equaliser.

But then it paid off, as right back Denzel Dumfries headed the winner from close to the penalty spot on one of his many forays into the Ukraine box that had also seen him influence their first two goals.

When the Netherlands had the ball, Dumfries and left back Patrick van Aanholt advanced so high up the pitch they formed a line of five attacking players.

Yet it also allowed Ukraine to break forward quickly and exploit that space left by the wing backs, and twice in the first half the visitors went close to punishing them. Yet those warnings were not heeded.

There is plenty of risk in the system, but in this instance it brought reward, though better teams might have been more clinical to take advantage of the exposed Dutch flanks.

Even after Ukraine scored their first goal to send a flutter through the crowd, De Boer stuck doggedly to the formation he insists his side will use at Euro 2020 rather than looking to close up shop.

"We always try to play dominant football and that's what we want with this system," he told reporters on the eve of the match.

"We want to get our hands on the game, which means your wing backs are always quite high. Everyone is used to playing 4-3-3, so you have your preference, but this system has been well received by the players."

Some supporters were so worried that De Boer had ditched the traditional Dutch formation, they flew a banner behind a plane at the team training on Saturday that read, "Frank, just 4-3-3".

Against Ukraine, it worked for the coach... just. But the deeper they go into the competition, and the better the opposition, his faith in the system could yet be tested.