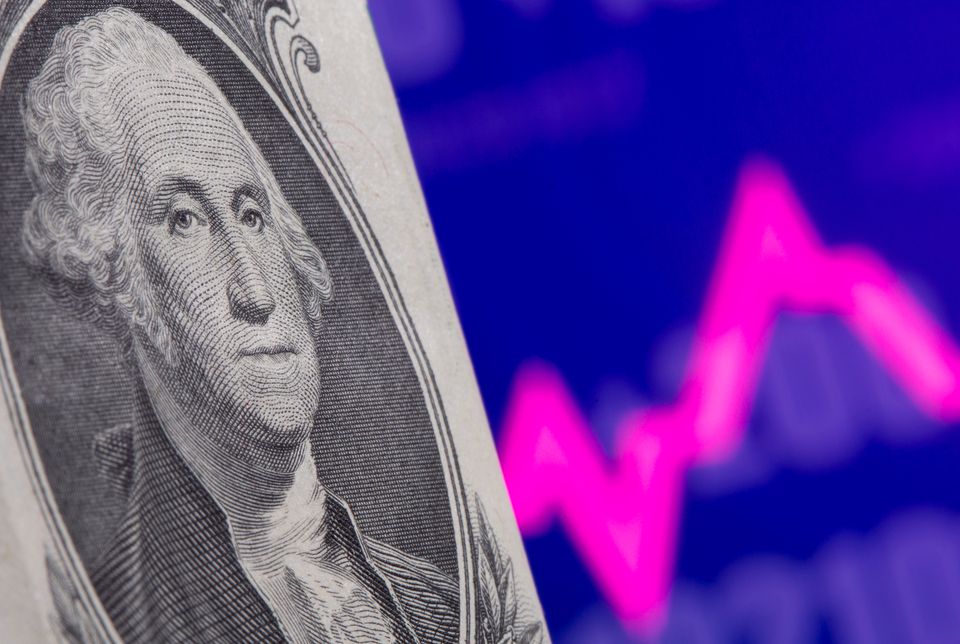 A U.S. one dollar banknote is seen in front of displayed stock graph in this illustration taken May 7, 2021. REUTERS/Dado Ruvic/Illustration

The U.S. dollar edged up against major currencies on Monday, after posting its biggest weekly gain in more than a month, as traders closed short positions ahead of a much-anticipated Federal Reserve policy meeting.

"The dollar repositioning shows some nerves heading into the FOMC policy update," NAB strategist Jason Wong wrote in a note, referring to the Federal Open Market Committee that will meet over two days to Wednesday.

"Over the past month there appears to have been a growing chorus that the time to talk about tapering bond purchases had been reached," Wong added.

Dollar direction has been driven in recent weeks by fluctuating bets on whether inflationary pressure from an economic reopening could force the FOMC into an earlier tapering of currency-depreciating stimulus.

Repeated comments by policy makers that inflation would be transitory have helped calm those jitters, but markets are now expecting new clues from the Fed on the timing of an exit from ultra-easy policy.

Caution ahead of the Fed meeting has pushed a Deutsche Bank gauge of implied currency-market volatility to the lowest since February of last year, dropping around 10% since the start of the month.

In the week ended June 8, speculators wound up net dollar short positions to the highest in nearly three months at $18.35 billion.

"While we acknowledge the uncertainty around tapering given the recent noise in data, we think that risks for USD ... remain somewhat asymmetric and skewed to the upside, though the pace of appreciation will likely be somewhat contingent on near-term Fed rhetoric," Morgan Stanley analysts wrote in a research report.

In cryptocurrencies, bitcoin traded around $39,000 after getting an almost 10% lift on Sunday, when Tesla Inc CEO Elon Musk tweeted that the electric carmaker will resume allowing bitcoin transactions when miners who verify transactions use more renewable energy.

Rival ether remained stuck around $2,500, the middle of a narrowing trading range spanning the past month.