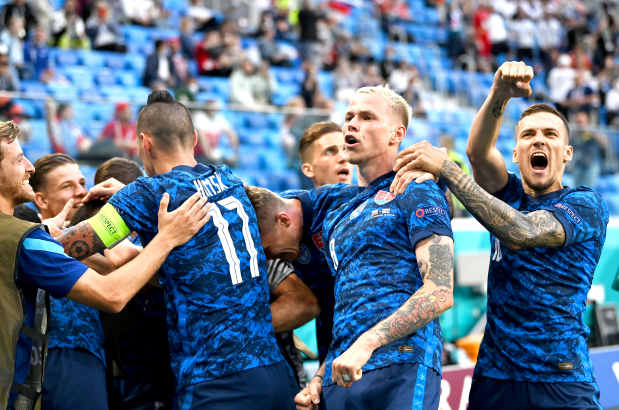 ST PETERSBURG: Slovakia defender Milan Skriniar capped a memorable afternoon as he complemented a superb all round display with the winner in their 2-1 win over 10-man Poland in the opening Euro 2020 Group E clash yesterday.

The 26-year-old centre back netted with a superb 69th-minute shot into the bottom right corner after Poland had midfielder Grzegorz Krychowiak sent off in the 62nd for a second yellow card.

Slovakia took an 18th-minute lead out of the blue through an own goal by Poland goalkeeper Wojciech Szczesny before Karol Linetty equalised in the 46th.

Poland were on the front foot in the opening stages but fell behind as Robert Mak beat two defenders on the left flank with neat footwork and cut inside before his shot hit the post and rebounded off Szczesny into the net.

Slovakia continued to soak up pressure but always looked dangerous on the break and their central midfielder Juraj Kucka curled a long-range effort over the bar in the 27th minute.

Krychowiak came up with Poland’s first meaningful effort when his shot from 25 metres sailed over, with Slovakia’s compact defence cutting out the supply routes to striker Robert Lewandowski.

Poland’s top scorer Lewandowski failed to make any impact in the first half and scuffed an attempt from inside the penalty area woefully wide in the 42nd minute.

Poland levelled 30 seconds after the break as Mateusz Klich released Maciej Rybus and the left back squared the ball back for Linetty to scramble a close-range shot into the far corner.

The Poles were left with 10 men after Krychowiak received his marching orders for a clumsy challenge on an opponent and Skriniar, who man-marked Lewandowski out of the game, struck with some aplomb at the other end.

The Poles failed to clear a corner and Skriniar gave Szczesny no chance with his fierce low shot from 14 metres.