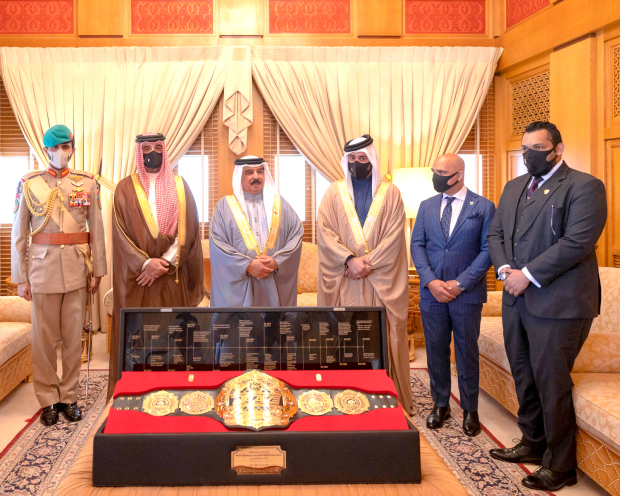 His Majesty with Shaikh Khalid and BRAVE CF officials

Shaikh Khalid, who is also the Supreme Council for Youth and Sports first deputy chairman, General Sports Authority chairman and Bahrain Olympic Committee president, briefed the King about the kingdom’s success in hosting BRAVE MMA championships since the federation’s inception five years ago.

His Majesty praised Bahrain’s honourable achievements in various sports and its success in organising many continental and international championships. He stressed the kingdom’s distinguished and pioneering status in the world as a hub for martial arts. The King also hailed the efforts of BRAVE CF in promoting martial arts and its continuous cooperation with Bahrain Martial Arts Council and Bahrain MMA Federation to organise championships.

Shaikh Khalid thanked the King for his support to Bahrain’s sports sector, stressing the continuous success of BRAVE MMA Championship, which was launched in Manama. He pledged to continue serving the sports sector to achieve the aspirations of His Majesty and further enhance the kingdom’s standing internationally.