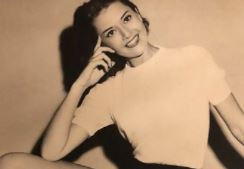 Joanne Linville, Star Trek and The Twilight Zone star, died on June 20 in her home in Los Angeles at the age of 93.

The 60s actress appeared on several other shows, such as Alfred Hitchcock Presents, The United States Steel Hour and Have Fun--Will Travel.

She starred in films such as The Goddess (1958) with Kim Stanley, Scorpio (1973) with Burt Lancaster and A Star Is Born (1976) with Barbra Streisand and Kris Kristofferson.

She later started an acting conservatory with Stella Adler called the Stella Adler Academy, and also wrote Seven Steps to an Acting Craft, which was published in 2011.

Her daughter, Amy Rydell, also an actress, posted this: