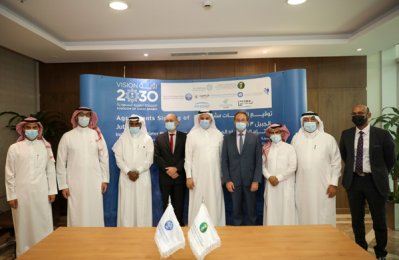 Officials pose for a photograph
The Jubail 3B Independent Water Project (IWP) has achieved commercial close.
The project is built by Saudi Water Partnership Company (SWPC), in association with a consortium comprising France-headquartered Engie (40%), Saudi based Nesma Company Limited (30%) and Abdulaziz Al Ajlan Sons for Commercial and Real Estate Investment Company (30%).
Following the April 29, 2021 announcement by SWPC naming the Engie-led consortium as preferred bidder, a 25-year Water Purchase Agreement between SWPC and the Engie - Nesma - Ajlan consortium was signed on the June 22, 2021 in the presence of Eng. Abdulrahman Al Fadli, Chairman of the Board of SWPC and Minister of Environment, Water and Agriculture.
Located 65 km north of Dammam airport in the Kingdom of Saudi Arabia, the Jubail 3B IWP plant will produce 570,000 cu m/day of potable water through reverse osmosis technology to supply the cities of Jubail and Dammam. The plant will include storage facilities for one operational day in addition to in-house renewable energy capacity to reduce grid electricity consumption throughout the desalination process.
The project is part of the water schemes in Saudi Arabia developed under the public-private-partnership (PPP) structure. The consortium will develop and finance the desalination plant, which will be operated and maintained by Engie. The Jubail 3B project was awarded by SWPC as a build, own, operate (BOO) contract, with commercial operation expected in 2024.
The CEO of SWPC, Eng. Khalid Al-Quraishi, said: “Despite the fluctuations, liquidity crises and changing global market conditions, the Saudi Water Partnerships Company and the Consortium succeeded in completing the financial closure procedures in close cooperation with the group of lenders, which indicates the company’s efforts. The Saudi Water Partnership Company will provide full support for investment projects, and to enhance private sector participation in sustainable development by providing the opportunity for local and foreign investors to participate in the implementation of these projects, thus achieving sustainable development, providing job opportunities for young people, and supporting local product and balanced development, in order to achieve the strategic objectives contained in “Saudi Arabia’s vision 2030” and the initiatives approved by the Saudi Council of Ministers to encourage private sector participation in economic development initiatives.”
Turki Al Shehri, CEO of Engie in Saudi Arabia noted: “The Jubail 3B project award represents another milestone achievement for Engie as a long-term positive energy partner to the kingdom. We commend SWPC for continuing to encourage private sector participation to support the development of large-scale infrastructure projects. Through our projects, and in close coordination with our partners, Engie remains committed to providing value-added services and knowledge transfer to the local workforce.”
The consortium, led by leading low-carbon energy and service solution providers, Engie, was awarded the Jubail 3B project in April 2021, after submitting a successful bid with tariff of SR1.591 halalas per cubic metre of potable water. The Jubail 3B IWP will create direct and indirect jobs opportunities during both the construction and operation phases, with a targeted 90% Saudisation rate during the operation period. In support of nation-wide targets, Engie and the consortium commit to upholding the appropriate local content standards, gradually increasing through each phase of the project.
For more than 30 years, Engie has been supporting the Gulf countries in their strong and rapid economic growth through the joint development of independent power and water project, representing today more than 30GW of gas-fired power generation capacities and 5.8 million of drinkable desalinated water.
Today the Kingdom of Saudi Arabia’s 2030 Vision, makes a clear shift to more energy efficient initiatives that includes clean desalination solutions.  Engie wants to be at the forefront of this paradigm change in the power and water landscape, supporting the kingdom in its low carbon transition by providing sophisticated and innovative desalination solutions. -- TradeArabia News Service