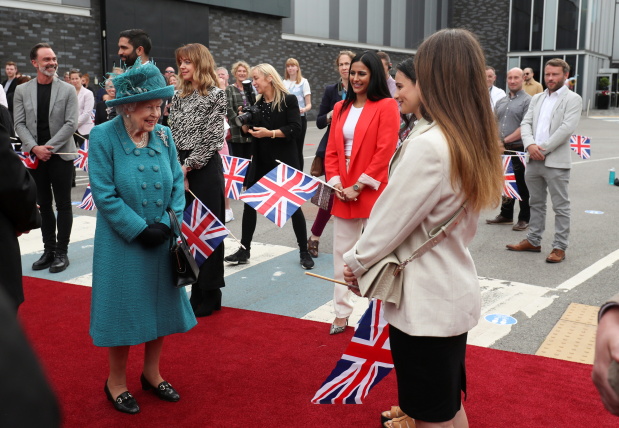 The 95-year-old queen, who is the world’s oldest and longest-reigning monarch, was greeted with cheers and applause as she arrived on the set and stepped out onto a red carpet covering the show’s famous cobble streets as its well-known theme tune was played.

She then met some of the soap opera’s long-serving cast members outside the Rovers Return Inn to hear how the soap opera had coped with restrictions to allow filming to continue during the coronavirus pandemic.

“You’ve given us all such a lift for you coming, thank you very, very much,” Barbara Knox, who has regularly appeared as Rita Tanner since 1972, told her.

“It’s marvellous that you’ve been able to carry on during this pandemic,” the queen said.

“Ma’am, you’re the one that’s carried on,” replied William Roache, who holds the record as the world’s longest-serving soap star and has played the role of Ken Barlow since the first episode.

Coronation Street, with its gritty plotlines about life in a fictitious district in the northern city of Manchester, has become a national institution since it was first broadcast on December 9, 1960.

There have been more than 10,000 episodes since its first transmission and it has been sold to more than 130 countries, garnering tens of millions of viewers worldwide.

Yesterday’s visit was the second to Coronation Street for the monarch, who is reportedly a fan of the show, after she opened a new set in 1982.

Her son and heir Prince Charles also made a special cameo appearance to mark the 40th anniversary of the show in 2000.