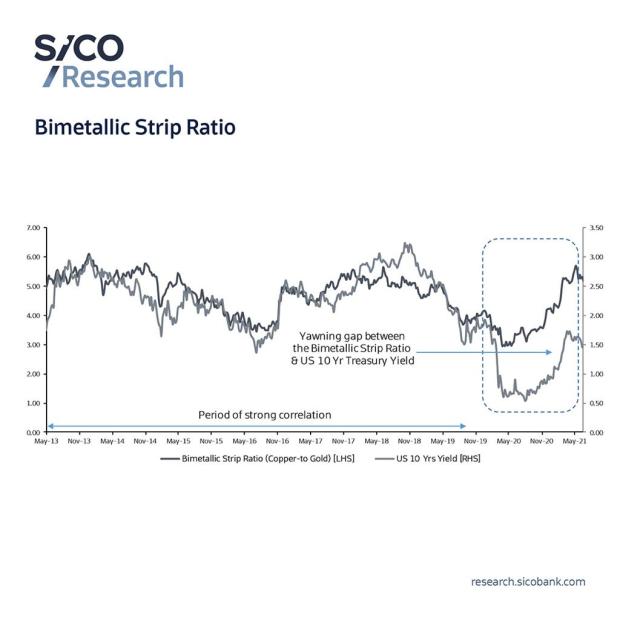 Bimetallic strips have commonly been used in thermostats to flag a potential overheating of air conditioners, geysers, refrigerators and circuit breakers before the occurrence of potential mishaps.

They operate on the principle of two dissimilar metals behaving differently when subjected to thermal stress, tempting us to apply a similar principle and build our own financial bimetallic strip to detect potential overheating of the financial market.

Our first metal is ‘Dr Copper’, one of the most widely used industrial elements, making its price movement a fairly reliable indicator of the current state of global economic health.

However, the challenges posed by the current unprecedented infusion of stimuli and liquidity pumping by both fiscal and monetary authorities alike, present difficulties in ascertaining whether the 55 per cent surge in the orange metal prices over the past one year can completely be attributed to only fundamental reasons.

It therefore warrants a comparison with the other metal of our financial bimetallic strip – ‘Mr Gold’, an element historically perceived as a safe haven by sceptical investors in an inflationary environment consequently, we analysed the movement of copper prices versus that of gold and observed a fairly cyclical trend every four to five years.

We define the ratio as Bimetallic Strip Ratio (BSR) that is copper price to gold price, wherein a surge in the ratio indicates the emergence of an economic upcycle followed by a tapering down as the economy matures and inflationary pressure kicks in.

In order to understand the monetary authorities’ reaction to various economic cycles of the past, we compared this ‘Bimetallic Strip Ratio’ to the long-term risk-free rate and found a surprisingly strong correlation.

To summarise, when BSR rises, perceivably an economic upturn cycle, monetary authorities take steps to increase the interest rate to stabilise the growth, an understandable action by central banks considering an elevated BSR in addition to a favourable economic environment, also warns of a potential pick-up in inflation.

Since the onset of the pandemic last year, the BSR with long-term yields has decoupled. Despite both initially correcting and moving in a similar direction, the BSR has witnessed a sharp revival, reaching close to its pre-pandemic highs, while on the other hand the ten-year bond yield is still struggling to reach even the lowest end of the yield cycle witnessed before the Covid-19 turmoil.

In a normal scenario, the rise in the ‘Bimetallic Strip Ratio’ is still fundamentally a favourable time to invest in the stock market yet the suppressed yield is cause for concern.

“This time it is different” is the most overused cliché in the investing world, and eventually normalisation will persist with the ratio moving in line with the long-term yield. It could be driven by the cooling off of economic activities, a rise in inflation or Fed increasing the interest rate cycle sooner than expected. Under any of the above scenarios, we may see the equity bull dragging its feet and ceasing its run leading to a market correction. To our dismay, we are witnessing evidence of all of the above taking place.

Copper prices are already moving into contango, a scenario where future prices are higher than spot prices, an indicator of a pricing pressure.

Fed has guided at an inflation expectation rate of 3.4pc, much higher than its comfort zone of 1.5-2.5pc with Fed members voting for a couple of rate hikes in 2023, compared to the previous guidance of no hike until 2024.

Our hypothesis may not materialise immediately however, the looming inflationary pressure will only rise unless corrective actions are taken, something which Fed may also be aware of.

Every story usually has a flip side and deserves to be covered. Our counter thesis is that the high commodity prices are a result of global lockdowns of various degrees leading to supply disruption from South American producers, further aggravated by the surge in shipping costs.

Undoubtedly it is less concerning if Fed believes it is more due to supply constraints and are likely to give us more time before they look to tighten the liquidity tap.

Whether it is supply based or demand based or most likely a combination of both, it is undoubtedly inflationary and central banks will have to eventually shift towards a hawkish gear.

A prompt action by the central bank would see higher interest rates and liquidity tightening which would be negative for the capital markets, while a delay by them would still be inflationary, in turn capping economic recovery, thereby leading to a similar consequence.

(The author is vice-president for financial institutions research at SICO)