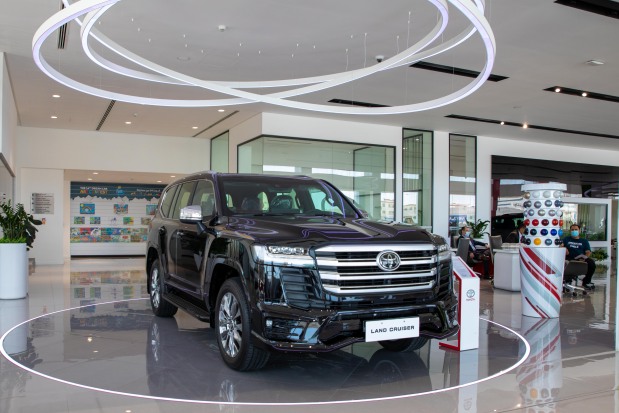 THE eagerly-awaited new generation of the iconic Toyota Land Cruiser has been launched in Bahrain by Ebrahim Khalil Kanoo reinforcing the legendary status of one of Bahrain’s and the Middle East’s most cherished vehicles.

As reported in the GDN, the all-new Land Cruiser combines outstanding all-terrain performance with a spacious, high-quality interior to bring drivers and passengers an ‘elevated experience on every trip’, the official Toyota dealers said at last week’s unveiling ceremony.

It’s already receiving rave reviews internationally with one motoring analyst describing it as a ‘great choice if you need genuine off-road ability with a little added luxury’, adding, that the latest updates ‘make it better than ever’.

Another social media pundit produced a video which garnered more than a million views simply to show how it is even tougher than ever before!

Takami Yokoo, chief engineer in charge of development, explained: “My team and I are eager for customers to experience this long-anticipated evolution, with groundbreaking enhancements to the platform and powertrain, an overwhelming exterior presence and an interior appointed with enough luxury and functionality to make customers forget they are travelling over harsh terrain.

“The launch of the all-new Land Cruiser is a celebration of its 70th year as an icon.”

The 2022 version comes with a newly-developed V6 twin-turbo 3.5-litre petrol engine that achieves class-leading performance that surpasses that of a conventional V8, producing 409 hp and up to 650 nm.

It has evolved into a one-of-a-kind vehicle with the sophisticated charm of a flagship model, while inheriting the traditional traits of robustness and authenticity appropriate for a full-fledged off-roader.

The cabin offers a range of advanced features such as wireless charging for smartphones, Active Noise Control, and a four-zone automatic air conditioning system with rear control switches.

As with any other Toyota model, safety remains a top priority for the all-new Land Cruiser, which comes with an advanced safety system.