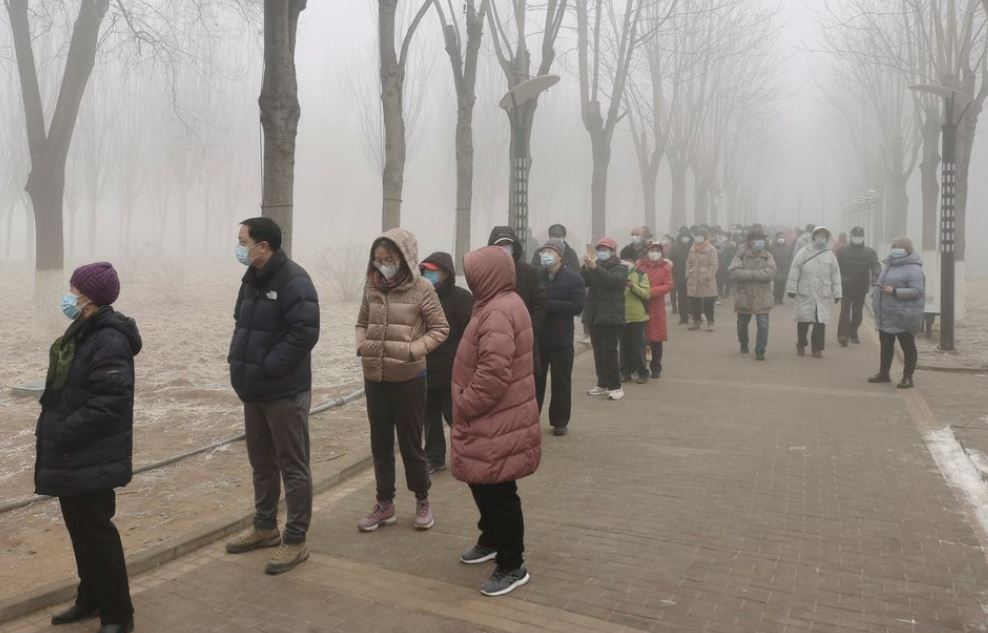 People line up for nucleic acid testing at a makeshift testing site in a park following the coronavirus disease (COVID-19) outbreak, on a polluted day in Daxing district of Beijing, China January 26, 2021 via Reuters

Here is a roundup of some of the latest scientific studies on the novel coronavirus and efforts to find treatments and vaccines for COVID-19, the illness caused by the virus.

Dirty air contributes to Covid-19 severity, according to a study from one of America's most polluted cities. Researchers who studied 2,038 adults hospitalised with Covid-19 in the Detroit area found those who needed intensive care and machines to help them breathe were more likely to live in neighbourhoods with higher levels of air pollution and lead paint. The worse the local air contamination, the higher the odds of needing intensive care and mechanical ventilation. Dr. Anita Shallal of Detroit's Henry Ford Hospital said long-term exposure to air pollution may impair the immune system and make it more susceptible to viral infections, while fine particles in air pollution may also act as a carrier for the virus and help it spread. The study "calls attention to the systemic inequalities that may have led to the stark differences in Covid-19 outcomes along racial and ethnic lines," Shallal said in a statement from the European Congress of Clinical Microbiology and Infectious Diseases, where she presented the findings on Friday. "Communities of colour are more likely to be located in areas closer to industrial pollution, and to work in businesses that expose them to air pollution."

The Beta variant of the coronavirus may be deadlier than the original version of the virus, according to researchers in South Africa who studied more than 1.5 million Covid-19 patients. Although the Delta variant now accounts for the largest percentage of new Covid-19 cases in many countries, Beta is still circulating, with mutations that make it highly contagious and harder to prevent or treat than the original version. The researchers found that people infected in the second wave of the pandemic, when Beta was dominant, were more likely to require hospitalisation than those infected during the first wave, after accounting for patients' risk factors and how over-burdened hospitals were. Furthermore, hospitalised Covid-19 patients had a 31% higher risk of death in the second wave, according to the report published Friday in The Lancet Global Health. The researchers did not know each patient's infecting variant, so they had to use the first and second wave periods as proxies for the variant type, coauthor Dr. Waasila Jassat of the National Institute for Communicable Diseases in Johannesburg told Reuters. "We hope to repeat the analysis, comparing the third wave in South Africa to the first two waves, to similarly try to understand whether the Delta wave is associated with a higher risk of death," she said.

The Covid-19 vaccines most often used in the United States are effective not just in clinical trials but in the "real world," too, according to a nationwide study. Using data on a sample of U.S. adults hospitalised between March and May 2021, researchers found that the mRNA vaccines from Pfizer/BioNTech and from Moderna "prevented about 87% of hospitalisations for Covid-19 that would have occurred if the vaccines had not been given," said Dr. Wesley Self of Vanderbilt University Medical Centre. Effectiveness was similar for the two vaccines and was highest - at 97.3% - among adults ages 18 to 49, his team reported in a paper posted Thursday on medRxiv ahead of peer review. Among immunosuppressed individuals, the vaccines prevented about 59% of Covid-19 hospitalisations that would have otherwise occurred. That is still a "substantial benefit," Self said, but "because the protection is not as good for people with immunosuppression, we believe (they) still should take precautions to avoid contracting Covid-19 even if they have been vaccinated," Self said.