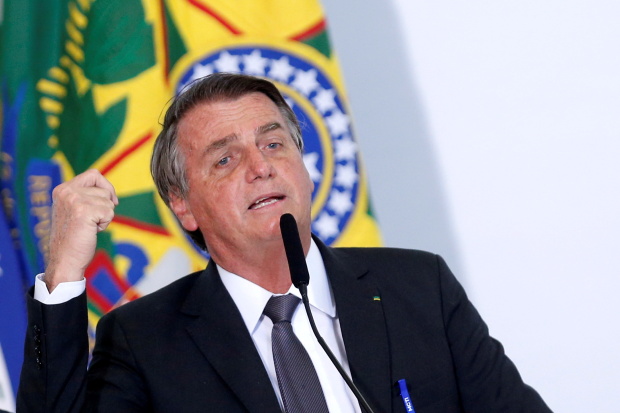 Brazil's President Jair Bolsonaro speaks during a ceremony to sign a law for the privatization of state-controlled electricity utility Eletrobras, at the Planalto Palace in Brasilia, Brazil, July 13, 2021. Reuters Photo

BRASILIA: Brazilian President Jair Bolsonaro will travel to Sao Paulo to undergo tests for an obstructed intestine, and could receive emergency surgery, the president's office said on Wednesday, in his latest health complication from a 2018 stabbing.

Bolsonaro, 66, went to the military hospital in Brasilia early on Wednesday, with the president's office initially saying it was to undergo tests for chronic hiccups.

But later on Wednesday, the president's office said Antônio Luiz Macedo, the surgeon who operated on Bolsonaro in 2018, had decided the president should go to Sao Paulo for additional tests to investigate the obstructed intestine, and possible emergency surgery.

Bolsonaro nearly died after being stabbed in the gut on the campaign trail in 2018, resulting in multiple follow-up surgeries.

On Twitter after the news of his transfer to Sao Paulo, Bolsonaro said he was confronting "one more challenge" and thanked people for their prayers.

Recently, Bolsonaro had appeared unwell. In a national address on social media last Thursday, Bolsonaro struggled to express himself at one point, and said he had been suffering from hiccups for a week. In other appearances over the past few months, he has also had a stubborn cough.

Bolsonaro's health has been an issue during his presidency. He caught Covid-19 in July last year, but recovered.