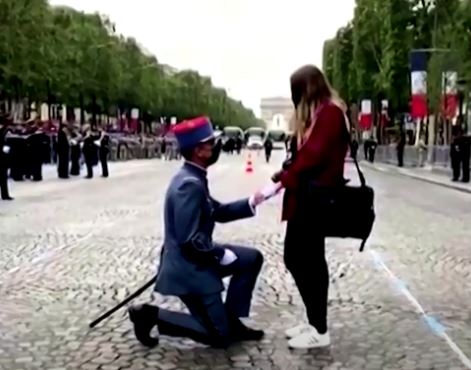 PARIS: A French trainee soldier on Wednesday proposed to his partner on the Champs Elysees in Paris shortly before President Emmanuel Macron rode down the boulevard in a military jeep during Bastille Day celebrations.

Amid delighted gasps from onlookers, the cadet, dressed in ceremonial uniform, dropped to his knee and briefly spoke to his girlfriend before placing a ring on her left hand, a video posted on the land army's Twitter account showed.

He then stood, lowered his face mask and kissed her, to cheers from members of the public and ranks of service personnel.

"It was a total surprise for her," 26-year-old Maximilien told BFM TV, adding that he had planned the proposal for two months.

It took place as members of the armed forces prepared for the traditional July 14 military parade along the boulevard that links the Arc de Triomphe with Place de la Concorde.

The young soldier's partner was allowed through a security cordon after the army learned of their comrade's intentions, a land army spokeswoman said.

"Everything is possible for our soldiers on the day of the #NationalDay. All our congratulations," the army tweeted.

France's celebration of national unity falls on the anniversary of the 1789 storming of the Bastille fortress in Paris, the turning point in the French Revolution.