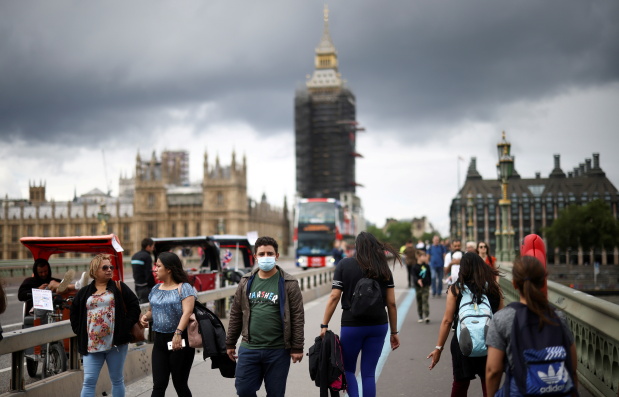 LONDON: As England's so-called "freedom day" draws near, excitement at the impending end of Covid-19 restrictions is tempered by worries of rising cases and downright fear among the vulnerable.

That means the last remaining businesses still closed, including nightclubs, can finally reopen.

"At some point we've got to find a way to move forward," said Eugene Wild, co-founder of The Cause club in north London which has been shut since March 2020.

He favours testing people before clubbing, but fears another shutdown if things go badly. "I don't think we could go through this again and survive financially," he added, speaking at the 1,200-capacity venue, which will open right after midnight when the curbs end for a party called Adonis.

In the Netherlands, nightclubs opened for two weeks before being closed again while Israel has also reimposed some restrictions as cases rose.

Johnson acknowledges that a wave of infections when restrictions end and more deaths are inevitable, but said worse harm would come from keeping the economy shut and a successful vaccine rollout has cut the number of serious cases.

Many scientists point to the more transmissible Delta variant, which has become dominant in Britain, as changing the calculation since the roadmap was laid out in February.

"It's not inevitable that you're going to have an exit wave... it's only inevitable if we're not going to do anything about it," Christina Pagel, professor of operational research at UCL, told Reuters.

"Delta has changed the equation, it's made it much harder to rely on vaccination to bring cases down on its own."

Britain has the seventh-highest death toll in the world but has seen two-thirds of adults receive two doses of vaccine.

That has given Johnson confidence to push ahead with easing restrictions, after a four-week delay due to Delta. He says summer, when schools shut and pressures on the health service are lower, is the best time to reopen, though with caution.

But with health minister Sajid Javid saying cases could hit 100,000 a day, more than 1,000 scientists have signed a letter to condemn government strategy as "unscientific and unethical."

Critics say the strategy will not only cause deaths but also debilitating long Covid in many, while increasing risks to the clinically vulnerable.

"Allowing infections to run amok in the country is a dangerous mistake," Stephen Griffin, an associate professor in the School of Medicine at the University of Leeds, told Reuters.

"I don't believe that our vaccines are at a sufficient level yet to allow this to happen safely."

"It makes going into crowded spaces virtually impossible for people like me, so while everybody is looking towards Monday the 19th of July, the so-called freedom day... it's more of an anxiety day for many of us," he told Reuters.

Anxiety might be a factor saving the country from worst-case scenarios. Graham Medley, who chairs the modelling sub-group of the government's group of scientific advisors, said public behaviour was a key variable.

"That uncertainty is really almost impossible to get rid of because we just do not know the way in which people are going to behave," Medley, professor of infectious disease modelling at London School of Hygiene and Tropical Medicine, told Reuters.

Two thirds of people in Britain think at least some restrictions should stay in place after July 19, one survey showed on Thursday.

Local rules, such as masks remaining mandatory on transport in London, might also have an impact.

Marc Baguelin, a lecturer in infectious disease at Imperial College London, whose modelling feeds into government advice, told Reuters that if people suddenly start mixing as they did before, infections could overwhelm hospitals.

"If this is more gradual and if people keep on having certain precautionary behaviour, that might be much better," he added. (Writing by Alistair Smout; Editing by Andrew Cawthorne)