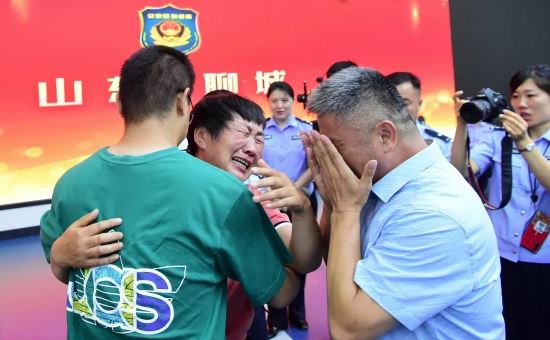 Guo Gangtang and Zhang Wenge reunite with their son Guo Xinzhen, who was abducted 24 years ago at the age of 2. (Image credit: Reuters)

A couple in China have found their long-lost son after 24 years of pain and searching.

Their son was abducted as a baby outside their front gate.

Guo Gangtang and his wife hugged their 26-year-old son at a reunion in Shandong.

Guo Gangtang would ride his motorcycle across china with banners of his missing son and also became a police aide to find other missing children.

The baby, named Guo Xinzhen, was kidnapped by a lady and her boyfriend and then sold to a couple in central China. They were thereafter arrested and are due to stand trial soon.

Police helped the parents find their son by searching databases and trying to match faces.

“Thank you for participating in anti-trafficking activities for 24 years and helping more than 100 children return home,” the police ministry addressed Guo Gangtang on social media.