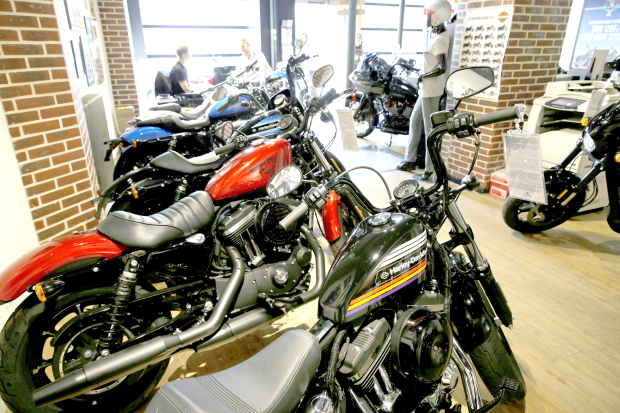 FILE PHOTO: The logo of U.S. motorcycle company Harley-Davidson is seen on one of their models at a shop in Paris, France, August 16, 2018. REUTERS/Philippe Wojazer/File Photo//File Photo

LONDON: Harley-Davidson Inc yesterday warned soaring raw material prices and supply chain and logistics bottlenecks would hurt its earnings in the second half of the year, prompting a sell-off in its shares.

In the latest quarter, raw material and logistics inflation shaved off 5 points from the US motorcycle maker’s profits. The shipping delays, meanwhile, are affecting deliveries of bikes to dealers, hitting sales especially in Europe and Asia.

Harley said the supply chain logjam would keep inventories depleted at company dealerships in the remainder of the year.

To mitigate the mounting cost pressure, the company will impose an average 2 per cent pricing surcharge from July 1 on some of its bikes sold in the US. The measure, however, will not completely offset elevated raw material costs.

The company’s shares fell after opening higher. They were last trading down 7.3pc at $40.61.

The 118-year-old American brand, which has failed to post sales growth in the United States in the past six years, has shifted focus back to big bikes, traditional markets like the United States and Europe, and to older and wealthier customers in a bid to grow profits.

Although the company’s performance in the latest quarter was exaggerated by a favorable statistical base as most of its dealerships in the US were hit by pandemic-linked lockdowns last year, it offered signs that the new strategy was working.

For example, unit sales of its bikes in the US – Harley’s biggest market – were higher than in the second quarter of 2019.

Similarly, the motorcycle maker substantially reduced the share of cheaper and low-margin models in overall shipments and was able to drive up sales despite spending less on marketing and promotions.