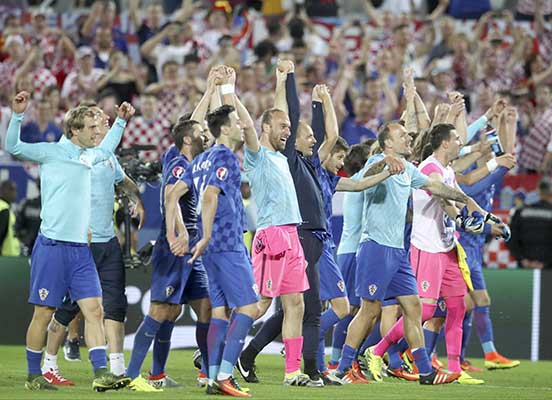 Croatian players celebrate at the end of their match against Spain

Flares thrown by Croatian fans halted their side’s momentum in a 2-2 draw with the Czech Republic on Friday and saw the country’s football federation fined 100,000 euros ($113,000).

However, despite threats of a repeat in Bordeaux, the Croatian fans were on their best behaviour to celebrate a glorious night as they ended the two-time defending champions 15-game unbeaten record in the European Championship finals.

“We achieved first place and I can be really satisfied that in all three matches we were really aggressive, we played to win,” said Cacic after the Group D drama. “We had great support from Croats all over the world and we have to fight to make all the Croatian people happy.

Croatia are now in a dream part of the draw as they meet a third-placed team in the last 16 in Lens on Saturday.

Meanwhile, Spain face a murderers’ row of Italy and then potentially Germany and France to reach the final.

“I am aware winning against Spain is a huge achievement, now we can be really confident. We can show how strong we are,” added Cacic. “We cannot think about which draw is better and that we are playing not so strong teams.

“You have to win every match. The draw only tells you one of Spain or Italy will not be in the quarter-finals. This is just the first stage, but we are first (in the group).

“I believe we can achieve even more success and be even more confident.

“Now we have to win every match.”

Croatia’s victory was even more remarkable as Cacic made five changes to his starting XI with star midfielder Luka Modric and influential striker Mario Mandzukic missing through injury.

However, Cacic is confident they will both be fit for the next round. “I hope Modric and Mandzukic can be fit. They had a special training regime in the past three days. There are no big problems, no ruptures, so I am optimistic.”

Hero of the night Perisic joked it was Italy who were the lucky with the draw as they avoided Croatia.

“You have to happy that you are not playing against Croatia,” he said when asked why he wanted to avoid Italy, where he plays his club football with Inter Milan, by scoring a sensational late winner.

However, Perisic warned Croatia cannot get carried away if they are to go better than when they reached the World Cup semi-finals in France in 1998.

“This was a really special evening for us,” he said.