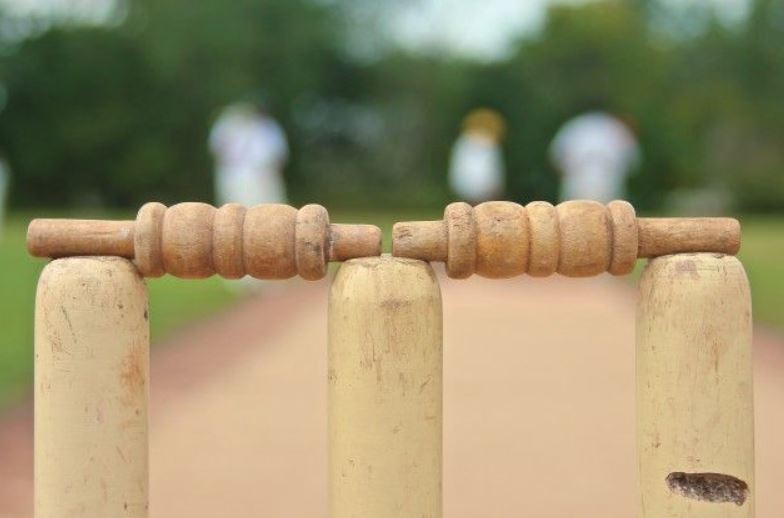 Spye Park Cricket Club, hidden away in the middle of a vast Wiltshire country estate, found its tranquil silence usually only broken by the twittering of birds and bleating of sheep uproariously shattered by the cheers of a sizeable collection of cricket supporters attending this momentous feast of festival cricket.

Greeting the Camels at this thatched club house, sporting a chandeliered entrance hall, was a mighty thunderstorm. Fortunately it was short-lived, but had the effect of reducing the match to a 30 over thrash. And what a thrash it was!

The Spye batsmen, led by ‘Lofty’ Loft and ‘Baby’ Bathe screeched to a hundred partnership, taking full advantage of a very short boundary on one side. Skipper Charles Forward tried 5 bowlers to no avail. Both openers retired on 50, leaving the way clear for the Fielding siblings to continue the bombardment. Enter the Camels secret weapon! Like a well-oiled machine the evergreen Steve Turner immediately found his groove and the run-rate started not to look so daunting.

The pressure to score faster induced the first wicket. This is how it goes – believe it or not. Fielder hits the ball to a fielder, Fielder calls “Yes”, other Fielder calls “No!”. Fielder lobs the ball to ‘keeper and Fielder is out, loudly berating sibling Fielder… happy families! If the Camels thought this was a good omen they were to be promptly disabused. Dave ‘Accurate’ Hilton took the brunt of sibling rage as his next over was plundered for 28 runs, including 4 sixes which scattered a semi-interested herd of sheep in a nearby meadow.

With some optimism Paul Baker turned his arm over and was rewarded with a run out wicket courtesy Dan Viles’ rocket throw. That the home XI didn’t score an unbelievable 250 was down to an inspired late bowling change that saw Richie Ryan pick up 3 for 12 in his 6 overs.

Still, 224 at eight an over was always going to be a tough call.

Things couldn’t have started worse as the Camels lost both debutant Gerwyn Caffrey and Guy Parker with only 4 runs on the board. Rescue, in the form of the ageless Paul Baker and young Charlie Viles, was if not quick, solid. Their half century partnership laid the foundation for what was to follow. Viles parted for a valiant 47, and Baker smote eight boundaries and a huge six in his 50 before retiring – a remarkable performance and one that had his mostly female fan club in raptures.

Baker’s departure left the Camels on 98 with 10 overs to go. The asking rate was now over 12 an over. The new partnership of Tom Wooding and Richie Ryan brought younger, faster legs and optimism of youth. Now the fireworks began. The pair aimed to score off every ball – well, they needed to. Both also regularly found the boundary – Ryan four times and Wooding three, to add to his three sixes. Their running between the wickets defied belief. With excitement reaching fever-pitch, an unlikely victory became a not too distant possibility. In the end, however, it was just one risky, nay impossible, run too many that undid both heroes. Ryan scored 33, a personal best, and Wooding 43 off just 16 balls. The best efforts of Forward and Dan Viles left the Camels just 10 short a famous victory. A standing ovation and another dramatic thunderstorm greeted both exhausted teams as they staggered from the field. This drawn match must go down as one of the many epic cricket battles the Camels almost won in their 26 years of touring.

The next fixture will again test the Camels stamina in a different way – a 20-20 versus mighty Marlborough CC.