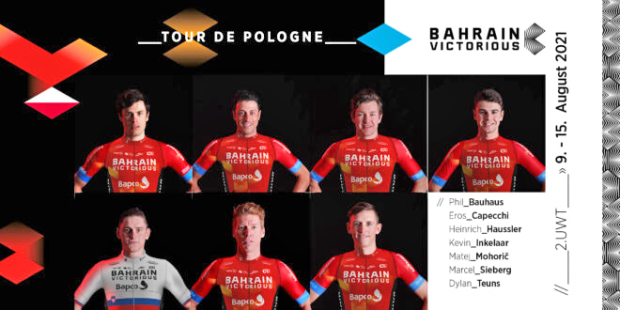 The Bahrain Victorious team for Tour of Poland

The 78th edition of Tour of Poland begins today.

This is the first World Tour stage race following the Tour de France, which will overlap with the third Grand Tour – La Vuelta.

The race kicks off in Lubin, a first for the World Tour. Stage one is expected to be a spring finish, while stage 3 is expected to be another chance for the fast men with the team looking towards Phil Bauhaus. Stages 2 and 4 are more suited to punchy riders, such as Matej Mohoric who has proven his strength in the breakaway at the Tour de France.

The fifth stage is the Queen stage where the GC contenders will battle it out on the 9-kilometre long Krowiarka Pass, the highest point of this year’s race. Stage 6 will settle the winner of the race in a time trial before a flat stage finishing in Krakow for the sprinter.

“We hope to be competitive across the board in this prestigious world tour event. In the sprint stages, we will be looking for Phil Bauhaus to increase his impressive tally of wins this season and in the more hilly and mountainous stages we will be aiming for good results with Dylan Teuns and Matej Mohoric.”