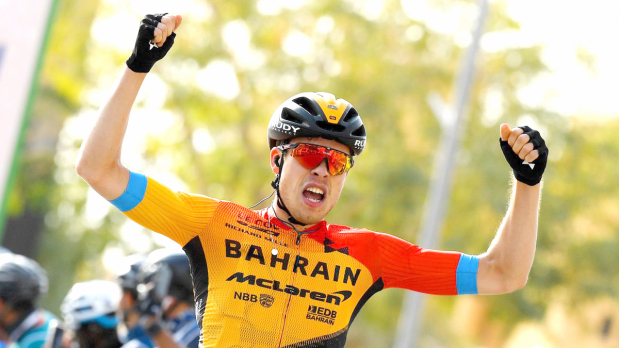 Portuguese rider João Almeida’s late attack on stage two of the Tour de Pologne paid off, as he withstood a late challenge from Italian Diego Ulissi of UAE Team Emirates to cross the line first in Przemyśl in Poland.

The Deceuninck-QuickStep cyclist completed the 200.8-kilometre route from Zamość in four hours 41min 33sec, with Ulissi and Slovenian Matej Mohorič of Bahrain Victorious on the same time.

Almeida made a late attack with just 1.3km to go on the uphill to the line, but the Italian narrowed the gap in the closing stages.

Despite the chase, Almeida had enough strength to hold on to the stage win.

Danish rider Mikkel Frølich Honoré of Deceuninck-QuickStep was fifth, another four seconds back, before Italian Lorenzo Rota of Intermarché-Wanty-Gobert Matériaux led a small group in at 12 seconds off the winner.

The third of seven stages is set to take place today, covering a 226.4km route from Sanok to Rzeszów.

On Monday, Phil Bauhaus of Bahrain Victorious took his sixth win of the season on the opening stage.

Bauhaus timed his sprint to perfection to beat Jose Hodeg (Deceuninck – Quick Step) to the line after great work from the team.

The first stage started in Lubin, eastern Poland. After 216 fairly flat kilometres, riders arrived in Chelm. This was not a typical sprint stage as riders tackled cobblestones in the last 600m with a climb peaking at 8%.

From the start, three riders went into the breakaway and the peloton never gave them an advantage of more than seven minutes. Another late escape by another rider was pulled back before entering the final circuit of 7.5km. It all came down to the final sprint where the team did a great job positioning Phil to the front for the sprint.