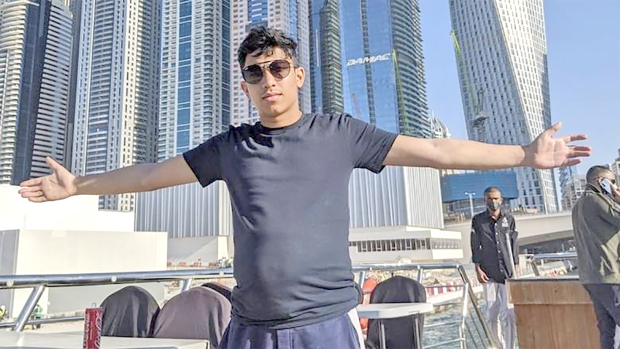 Naseem ... home away from home

Dubai: A UK teenager, who calls himself the biggest fan of the UAE, says it is the only place he wants to visit during any break or vacation.

Born and raised in the UK, Mohammed Naseem,16, has had around 25 lifesaving surgeries since birth for various complications, but he still manages to visit the UAE at least a couple of times or more every year.

Naseem calls it therapeutic, and his father says it is the only place he wants to visit. His latest visit to the UAE was on August 15, after the UK removed UAE from its red list from August 8 onwards, Khaleej Times reported.

The young man couldn’t help but choke with emotion as the plane touched down at Dubai International Airport.

The teenager has flown to the UAE 26 times, ever since he was first introduced to the country by his dad who brought him to Dubai on a vacation after he had gone through a number of surgeries in 2008.

“After all the trauma and medical problems we have been through. We thought, why not go to Dubai as a family to recover and have a holiday. Naseem was only four when he first visited Dubai, and he fell in love with the UAE so much so that every single year he has to come here multiple times,” Naseem’s father Sam Ali said.

“The UAE and its people left a lasting impression on him, and he couldn’t get the emirates out of his head. Since then, Naseem visits the UAE at least twice a year and sometimes even three of four times,” he added.

Ali said going to the UAE has become a bit of a “survival strategy” for Naseem. Nothing excites or brings him more happiness than visiting Dubai.

“Since he has gone through so much trauma and several surgeries, we are making every effort to ensure his wishes are met and he stays happy. We have been advised by his doctors that being happy and cheerful will help him recover soon and will keep him healthy for a longer time. We know nothing makes him happier than visiting the UAE,” he said.

Naseem could not travel to the UAE for almost a year due to Covid restrictions, but he finally made it earlier this year in January. “I was constantly checking and waiting for flights to the UAE to start after the country was placed on UK’s red list. I felt miserable and was waiting for the status to change. When the announcement came, I booked the entire family’s ticket to the UAE in the next hour, “ Naseem said.

The teenager loves to document all his flight tickets and UAE visas. He has hundreds of pictures documenting his trips to the emirates since 2008.