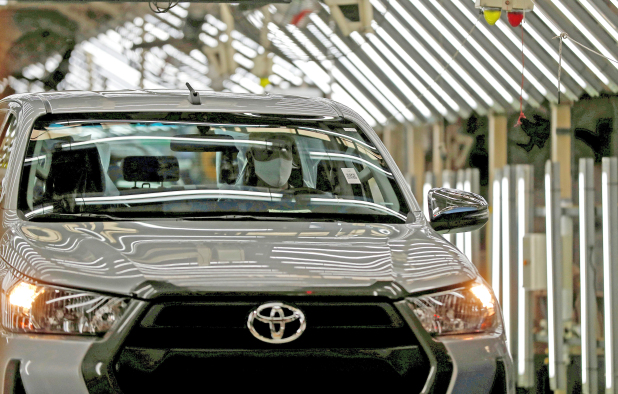 FILE PHOTO: A car is pictured at the Toyota assembly plant in Zarate, on the outskirts of Buenos Aires, Argentina March 15, 2021. REUTERS/Agustin Marcarian/File Photo

TOKYO: Toyota Motor said it will slash global production for September by 40 per cent from its previous plan, becoming the last major carmaker to cut output due to a global chip crunch, but it maintained its annual sales and production targets.

Toyota’s success in navigating the chip shortage better than rivals has come down to its larger stockpile of chips under a business continuity plan adopted after the 2011 earthquake and the Fukushima nuclear disaster.

The world’s largest carmaker by sales volumes reiterated yesterday its global production target of 9.3 million vehicles for the year ending in March, as well as its plan to sell 8.7m cars in the period.

Toyota said the September cuts included 14 factories in Japan and overseas plants, and that the company would reduce its planned global production that month by around 360,000 vehicles.

Of these, 140,000 will be at Japanese plants, with the rest in the US, China, Europe and other Asian countries.

Carmakers worldwide have been cutting production due to the months-long chip shortage, but a resurgence in Covid-19 cases in Japan, Philippines, Thailand, Vietnam and Malaysia – home to car factories and chip plants – have led to stricter curbs and compounded the crisis.

Germany’s Volkswagen said it may need to cut production further and that it expected the supply of chips in the third quarter to be “very volatile and tight.”

Ford said on Wednesday it will temporarily shut its Kansas City assembly plant that builds its best-selling F-150 pickup truck due to a semiconductor-related part shortage as a result of rising cases in Malaysia.

Earlier this month, Toyota had flagged an unpredictable business environment due to fresh Covid-19 cases in emerging economies, the semiconductor shortage and soaring material prices.

Toyota shares closed down 4.4pc in their biggest daily drop since December 2018, pulling the benchmark Nikkei average to a seven-month low.