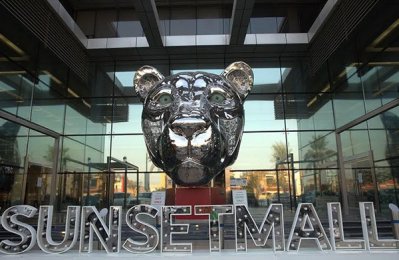 Dubai’s Sunset Mall, Jumeirah 3 will display Mbaye, expected to be the largest statue in the region weighing 120 tonnes upon completion, during a 60-day art exhibition, which started on August 18.

The gigantic lioness head and feet, centrepieces of the African-themed mega sculpture, are ready for a unique public showcase, after being designed and built in Dubai.

The entire project has so far taken seven years of design, engineering and fabrication. Expected to tower at 13 meters high upon completion, Mbaye the Lioness is aptly named after Captain Mbaye Diagne, the slain UN peacekeeping soldier who was killed during the 1994 Rwandan genocide while he was protecting innocent civilians.

According to Inox Arabia, the creators of the one-of-a-kind art exhibition, Mbaye the Lioness is a commemoration of the selfless act of caring demonstrated by the fallen soldier.

“We are delighted and honoured to unveil the ongoing sculpting of Mbaye the Lioness - a work of art that epitomizes the love and care that Captain Mbaye Diagne showed to thousands of innocent people that were caught up in the tribal war. The objective of this unique art showcase is to inspire people not only in the UAE, but all over the world to care for others regardless of where they come from,” said Lawton Loraine, the chief artist and creator.

Mbaye the Lioness, which was largely inspired by African designs and influences, was conceptualized by Lawton Loraine to incorporate 210 different native flowers from all over the world representing every country and the beauty of diversity.

The Sunset Mall management team congratulated the exhibition organizers, creators and everyone who has participated in sculpting Mbaye the Lioness, terming the event a historic and timely gesture.

“On behalf of Sunset Mall, its customers and tenants, we are very pleased to have the privilege of unveiling to the world - Mbaye the Lioness. This statue and exhibition couldn’t have come at a better time. Throughout the global health crisis, we have been urging our employees, customers and partners to take care of themselves and others. This is what Captain Mbaye epitomized and what Mbaye the Lioness now stands for,” said Abdallah Mouneimne, MD at Dubai Investment Properties that owns Sunset Mall.

The meticulously carved feet of Mbaye the Lioness are crafted using specially imported marble from Carrara, Italy and mined from a quarry in the Tuscan mountains (the same that was used by Michelangelo), while the giant head is made using 2 tonnes of stainless steel and a type of jade - Aventurine (a rare quartz stone from Brazil) - for its green eyes and Obsidian. These stones are revered in mythology for luck and healing properties.

Public viewing of the sculptures, which have taken designers, artisans and craftsmen over seven years to complete, will be free of charge in Sunset Mall and is open to people of all ages. The steel head has been lit up at night at the mall’s entrance with dazzling lights, to enthral mall visitors and people on Jumeirah Road. Sunset Mall is a community mall with a line-up of cafes, supermarket, salons and services, conveniently located next to Kite Surf beach.

To show solidarity with people of all nationalities and race, Mbaye the Lioness is being built by people from all over the world including the Philippines, Bangladesh, India, Nigeria, Cameroon, Kenya, China, Italy, the UK and the UAE. – TradeArabia News Service