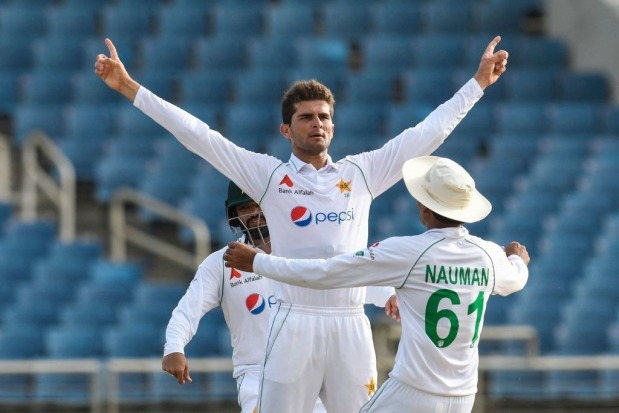 KINGSTON: Pakistan’s Shaheen Shah Afridi took 10 wickets in the match as the tourists bowled West Indies out last night to win the second Test at Sabina Park and tie the two-match series.

Shaheen claimed 4-43 to add to career best figures of 6-51 in the first innings as West Indies were dismissed for 219 on the last day to give Pakistan victory by 109 runs. The hosts were always up against it after resuming on their overnight tally of 49-1, 280 runs shy of the imposing target of 329, but with survival more than chasing victory in mind.

But they lost four wickets in the morning session to slump to 113-5 at lunch with Hasan Ali ensuring top order batsmen Nkrumah Bonner and Royston Chase both departed cheaply.

Home captain Kraigg Brathwaite, 17 not out overnight, lost his wicket in the second over after tea as he cut Nauman Ali straight to point to be dismissed for 39.

A 46-run partnership for the seventh wicket between Jason Holder and Kyle Mayers ended at tea with the Windies only temporarily prolonging the inevitable.

Mayers made 32 before departing and Holder top scored with 47 before Shaheen wrapped up the tail to ensure success for the visitors as he was named man of the series.

“It was tough because it was really hot out there but we delivered together as a team bowling unit,” Shaheen said after the match.