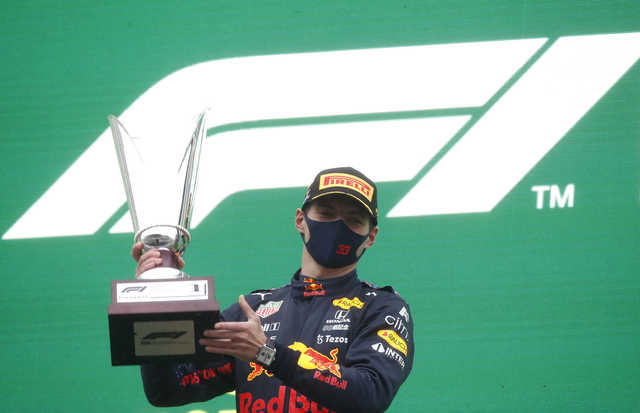 Red Bull's Max Verstappen won Formula One's shortest race on Sunday, a wet Belgian Grand Prix with no overtaking that was called off as soon as enough safety car-led laps had been completed to award half-points.

With no actual racing allowed, the Dutchman secured his sixth win of the season ahead of Britain’s George Russell, who had put Williams on the front row with a stunning display in a wet qualifying on Saturday.

Championship leader Lewis Hamilton, who again missed out on the chance to secure a record-extending 100th win, was third for Mercedes.

It was only the sixth time since the first championship in 1950 that half points had been awarded, and Hamilton's lead over Verstappen in the overall standings dwindled to just three points.

Red Bull also cut their deficit to Mercedes in the constructors’ standings to seven.

"Its a big shame to not do proper laps but the conditions were very tricky out there,” said Verstappen after sealing what will count as his 16th career win and first at Spa.

Hamilton said the fans, who sat huddled for three hours in the torrential rain and cold, should be given their money back.

Russell, in his 50th race with Williams, secured his first Formula One podium and handed the former champions their first top-three result since Canadian Lance Stroll’s third-placed finish in Baku in 2017.

“We don’t often get rewarded for great qualifyings and we absolutely did today,” said the 23-year-old, widely tipped to land the Mercedes seat alongside Hamilton next year.

“The whole team deserve it because there’s so much hard work going into this over the last few years and there’s not really been anything to show for it.”

Conditions at Spa-Francorchamps had begun deteriorating before the start of the race.

The formation lap was initially delayed by 25 minutes but, with visibility poor, Formula One race director Michael Masi suspended the race start.

After nearly three hours, race control found a window to send the cars out for two laps behind the safety car, ensuring they completed the minimum distance required for a race result to be declared.

The governing FIA's final race classification, however, gave the positions after lap one, explaining that this was in accordance with the sporting regulations.

The race was ultimately called off three hours and 44 minutes after its scheduled start time and will also go down in the sport's statistics as only the 11th without a single retirement.

Mexican Sergio Perez crashed his Red Bull on his sighting lap before even forming up on the grid but stewards allowed him to start the race from the pitlane, with Red Bull mechanics taking advantage of the delay to complete repairs.

It proved to be in vain as the 31-year-old was classified last.

Hamilton’s Mercedes team mate Valtteri Bottas, who started 13th after a five-position grid drop, moved up a place after Perez’s crash. He finished outside the points in 12th.