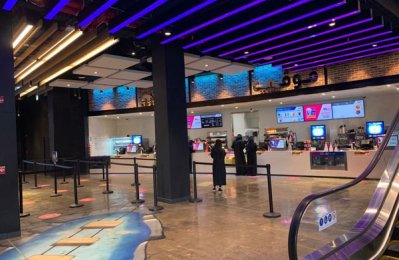 Chapman Taylor, a leading global architect and masterplanner, has announced the opening of a 10-screen Muvi cinema at Mega City Walk in the Saudi city of Taif.
The launch of the 783-seat complex is a first for Taif city and comes as part of the roll-out of the Muvi brand across the kingdom.
Established in 2019 in Riyadh, Muvi Cinemas is the first Saudi-owned cinema chain that offers movie-goers an array of viewing options ranging from Xperience, ScreenX, Dolby Cinema, and Samsung Onyx theaters.
Following the lifting of the ban on cinema in 2018, the very next year Chapman Taylor was signed up by the Saudi group to design and deliver a series of state-of-the art cinemas for the Muvi Cinemas brand.
The first opened in August 2019 at The Mall of Arabia, which, at that time, was the largest cinema in Saudi Arabia, said the statement from Chapman Taylor.
Several more are now open, including at Mall of Dhahran (currently the largest cinema in the country by seat count) while many others are under construction, it added.
Chapman Taylor said the designs for the cutting-edge cinema venues have a theme of urban downtown, with the intention of creating a dynamic, modern and innovative cinema experience.
"Internal spaces are characterised by an industrial, yet luxurious, material palette, including timber, exposed steelwork, exposed brickwork and an exposed concrete floor," stated a company spokesman.
"Digital LED screens and dramatic lighting installations complement the city warehouse feel, providing a strong visual identity for the developments," he noted.
Working for, and with, leading industry names, Chapman Taylor has decades of experience in creating state-of-the-art cinema environments which enhance moviegoers’ experience and maximise value and impact for the cinema developers.
"We strive to design the best cinematic experience available, combining state-of-the-art technology with simplified functionality to create maximum value for both clients and cinemagoers. This is why many of the best-known names in cinema choose to work with us again and again," he added.-TradeArabia News Service