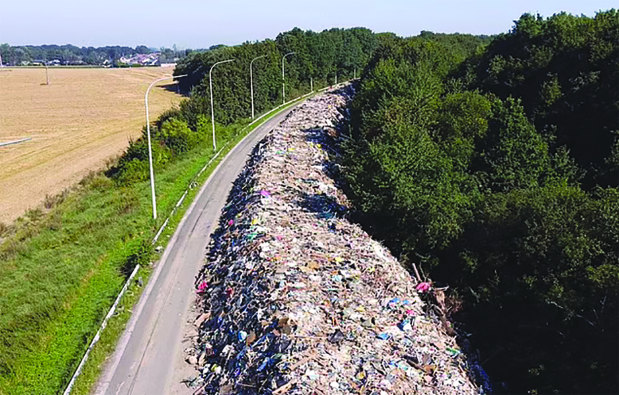 The abandoned motorway in Belgium almost completely buried beneath 90,000 tonnes of garbage

BRUSSELS: A five-mile stretch of abandoned motorway in Belgium is almost completely buried beneath 90,000 tonnes of garbage left behind by devastating floods.

The makeshift dump, along the closed A601 motorway north of the city of Liege, is testament to the devastation wreaked by unprecedented floods earlier this year.

When residents in this part of the affected Wallonia region had their homes, schools and businesses broken apart by the rushing water, authorities were suddenly confronted with a mountain of refuse.

“All their household appliances, their cupboards, their furniture were destroyed, and so they put them in the street outside their places and the municipalities were obviously forced to clear the streets for safety reasons,” the head of Liege’s rubbish-clearing service INTRADEL, Luc Joine, said.

With local garbage and recycling depots quickly saturated, INTRADEL designated three temporary sites to store the 160,000 tonnes that were trucked away – more than half of it going to the disused motorway, in a mostly rural area.

After an initial screening by police to ensure no human remains were hidden in the stacks of garbage, the regional government stepped in.

Joine explained that the road surface prevented pollution seeping into the topsoil, and tarpaulins shielded visible parts of the trash highway from nearby houses while guards were posted around the clock to stop trespassers.

Authorities, though, are aware that the road-dump solution is a short-term fix.

The plan is to clear the site by recycling up to 60 per cent of the debris and incinerating the rest, but the scale of the task means the operation will take at least nine months.

The environment minister for the regional Walloon government, Celine Tellier, said the administration has set aside 30 million euros to tackle the trash at the three temporary dumps.

She added that the underlying approach was to show respect to the people whose accumulated and broken detritus was now steaming under the Belgian sun.

“These are also pieces of the lives of citizens who lost a lot of memories in the floods,” she said.

“It is touching, on a personal level, to see children’s toys, child car-seats and so on next to a family photos. And so of course this debris is important and I think we need to treat all this, all these personal histories, with dignity.”