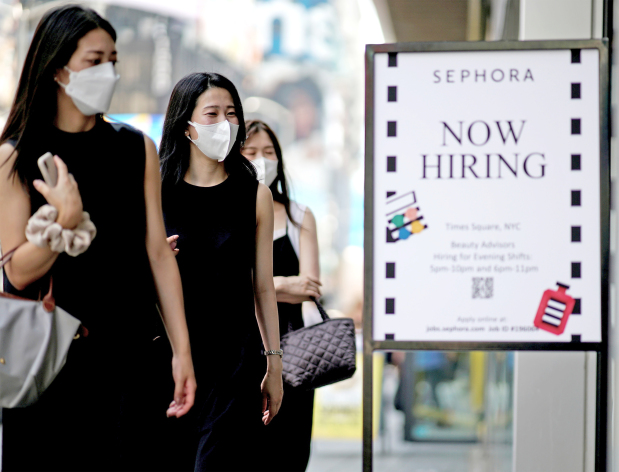 WASHINGTON: The US economy created the fewest jobs in seven months in August as hiring in the leisure and hospitality sector stalled amid a resurgence in Covid-19 infections, which weighed on demand at restaurants and hotels.

But other details of the Labour Department’s closely watched employment report yesterday were fairly strong, with the unemployment rate falling to a 17-month low of 5.2 per cent and July job growth revised sharply higher. Wages increased a solid 0.6pc and fewer people were experiencing long spells of unemployment.

This points to underlying strength in the economy even as growth appears to be slowing significantly in the third quarter because of the soaring infections, driven by the Delta variant of the coronavirus, and relentless shortages of raw materials, which are depressing automobile sales and restocking.

“It is important to keep the right perspective,” said Brian Bethune, professor of practice at Boston College. “Given the supply chain constraints and the ongoing battle to lasso Covid-19 to the ground, the economy is performing exceptionally well.”

The survey of establishments showed non-farm payrolls increased by 235,000 jobs last month, the smallest gain since January. Data for July was revised up to show a whopping 1.053 million jobs created instead of the previously reported 943,000.

Hiring in June was also stronger than initially estimated, leaving average monthly job growth over the past three months at a strong 750,000. Employment is 5.3m jobs below its peak in February 2020. Economists polled by Reuters had forecast non-farm payrolls increasing by 728,000 jobs in August.

Though the Delta variant was the biggest drag, fading fiscal stimulus was probably another factor. The response rate to the survey is lower in August and the pandemic has made it harder to adjust education employment for seasonal fluctuations.

The initial August payrolls print has undershot expectations over the last several years, including in 2020. Payrolls have been subsequently revised higher in 11 of the last 12 years.

Employment in the leisure and hospitality sector was unchanged after gains averaging 377,000 per month over the prior three months. Restaurants and bars payrolls fell 42,000 and hiring at hotels and motels decreased 34,600, offsetting a 36,000 gain in arts, entertainment and recreation jobs. Retailers shed 29,000 jobs.