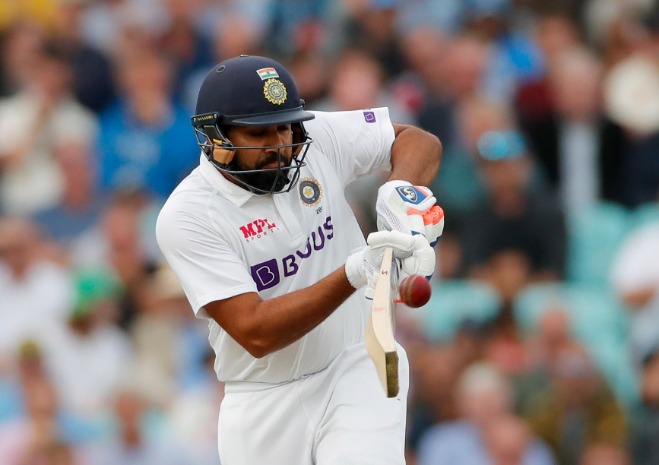 London: A dominant India took control of the fourth Test against England at The Oval yesterday, extending their lead to 171 at stumps on day three, as Rohit Sharma struck his first Test hundred away from home and eighth overall.

The visitors were on 270-3 when bad light brought a premature end to proceedings.

Earlier, the England bowlers were made to toil by the combination of Rohit (127) and Cheteshwar Pujara (61), who put on a partnership of 153 for the second wicket, making run-scoring look easy despite seamer-friendly overcast conditions.

Rohit constructed his innings perfectly, resolutely defending outside the off stump and taking runs off anything loose, with Moeen Ali’s off-spin often a target. He found an able partner in Pujara, who played with uncharacteristic aggression, hitting nine boundaries.

There was a lot of restraint at the start when KL Rahul (46) was attacking the bowlers but in between a straight drive at the onset and the first cover drive was brought out of the closet only at the end of second hour when Anderson over-pitched one.

He did offer a couple of streaky chances that Rory Burns at slip failed to capitalise or that uppish on-drive that caught Chris Woakes stationed at mid-on on the wrong foot.

But those were minor blemishes en route his hundred off 204 balls which had 12 fours and a six.

However, Pujara should not be denied his share of credit as his counter-attacking batting did help Rohit to play his shots.

The square cut that had gone extinct from his game of late was back on the day as he looked the vintage Pujara, who would rock back and play those regal shots including a late cut and a ramp shot.

England threatened a brief comeback after Ollie Robinson removed both Rohit and Pujara in the first over with the second new ball, but skipper Virat Kohli (22 not out) and Ravindra Jadeja (nine not out) steadied the innings.

Put into bat by the hosts on day one, India were bowled out for 191 in their first innings. England, with Ollie Pope top-scoring with 81, responded with 290 all out.