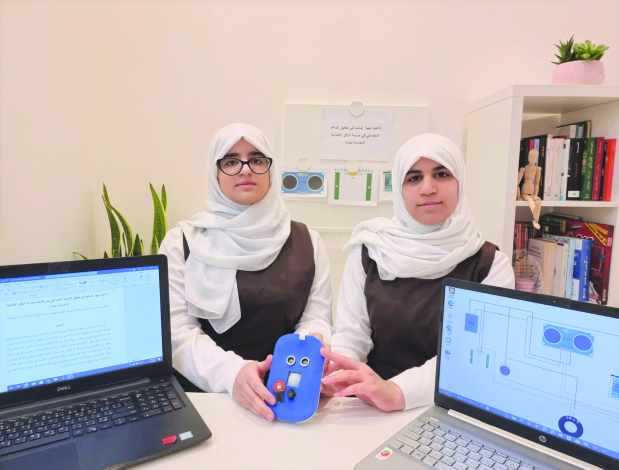 The sisters with the device

Two Bahraini sisters have joined hands to invent a new device which can be used to enforce social distancing requirements.

Budding inventors Fatima and Mariam Al Shaibani are both students at the Zallaq Primary and Intermediate School for Girls.

The device, named “Salim”, which means “Safe”, beeps and flashes to alert people whenever social distancing is not maintained.

The siblings believe that their device would suit all people, including those with physical disabilities.

They now hope their invention will be approved as a national project which would benefit people.

Fatima and Mariam were the winners in the scientific research project, organised by the Education Ministry.

They recognised the role of their school in developing their competence in digital programming and dealing with electronic devices.

Apart for demarcating social distancing, “Salim” has been programmed to protect children outdoors.

It can also be placed on electric poles or other structures to alert people to potential dangers.

According to the sisters, their device can also be useful for people suffering from low immunity or communicable diseases.

Fatima joined the gifted children’s programme when she was six years old. She thanked excellence and talent specialist Ghada Al Abbassi for her role in mentoring her.